Little-Known Side Effects of Birth Control 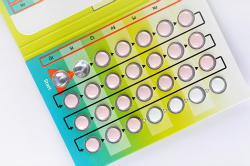 Calek/Shutterstock
Hormonal birth control like the Pill, the patch, a shot like Depo-Provera and Nuva-Ring all provide your body with the kinds of and similar levels of hormones produced in the early stages of pregnancy in order to control fertility. Yet, certain side effects are not revealed because they were determined to be "irrelevant" to your experience of the drug.
I began my use of birth control when I was eighteen, the summer before I would go to college. I was newly sexually active and loving it. I was highly motivated to learn about the different types of birth control so that I could make my own, educated decision. I felt that birth control was one of the first and most important decisions I could make for myself as an adult woman.

One Size Does Not Fit All

I first began using the patch, which is known as Ortho Evra. At the time, my doctor assured me it was safe and I thought my research into the patch was telling me the same thing.

Ortho Evra is a kind of hormonal birth control that delivers its dosage through the skin. The patch contains ethinyl estradiol (EE) and norelgestromin. These drugs are the synthetic analogs of the hormones estrogen and progesterone, respectively. Because the patch must deliver its dosage through the skin rather than as a shot or orally (methods that have a higher uptake), it was designed to be stronger and deliver a higher concentration of EE than other similar methods of birth control. In addition to its mode of delivery, the patch is also designed to be effective in women who weigh up to 198 pounds.

What’s wrong with this picture? The full disclosure of Ortho Evra warns that steady-state concentrations of its active ingredients (the synthetic hormones) are 60% higher than other forms of hormonal birth control, meaning that at any one time there is more of the drug in the body than most other forms of birth control.

I’m only able to analyze this now, as a college graduate with a degree in biochemistry and a concentration in organic chemistry. But when I was eighteen, all I knew was that I was throwing up constantly. I was unable to sleep, usually in a foul mood or felt incredibly low. I couldn’t eat and for a week, I wrongly suspected food poisoning. As a very small woman at 94 pounds, I was likely at the far end of the safe continuum to take the drug. Yet no warnings exist from the manufacturers of Ortho Evra and my situation wasn’t analyzed by my general practitioner.

I eventually suspected the patch and removed it. It simply wasn’t right for me. The facts seem clear in retrospect, yet I wasn’t fully advised. Luckily, there was no permanent harm done.

I switched to Loestrin Fe, a low-dosage form of hormonal birth control. At first, I was very pleased, especially in light of my recent experience with the patch. My acne cleared up and my normally long periods began to lighten. In fact, they lightened a lot – they disappeared.

While a period is not medically necessary for any woman, with my periods also went my sex drive. It was like a total system shut down. I was never in the mood nor could I be aroused. This is because the pill, in addition to synthetic hormones, contains sex hormone binding globulin (SHBG). SHBG is a protein that, once in circulation, begins to mop up testosterone wherever it finds it. It’s perhaps counter-intuitive that it is testosterone, not estrogen, that is essential to a woman’s sex drive. Without testosterone, most women report lowered or non-existent libido. And data gathered from women going off the pill has shown that testosterone levels may not recover after usage of the pill stops for an extended period of time.

The FDA does not require manufacturers to list lowered sex drive as a side effect for birth control because: “the FDA doesn’t consider sexual behavior to be something they’re concerned about.”

Ultimately, I’m no doctor. I can’t advise anyone what birth control is right for them. I would however, spread the word about my experiences so that other women can make more informed decisions. The manufacturers and even your doctors, for whatever reason, may not be willing and/or able to properly inform you as to what you should do. Birth control is not a breezy choice to be made like the commercials of relaxed women around swimming pools would have you believe.
Tags:
Views: 1675