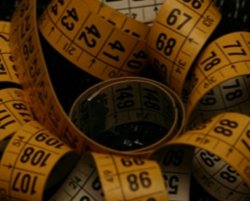 http://morguefile.com/creative/solrac_gi_2nd
Almost every year, I decide not to make a New Year's resolution. This is mostly because of cynicism, and watching other peoples' resolutions- mainly my mother's goal every year to lose weight- fail over and over again. This year is slightly different though, because I actually want a change, and am going to bring it about.
To backtrack a little, 2012 was an interesting year for my body image. From January to September I did quite a bit of running, spinning, and working out, averaging around thirty miles ran per week. I was the skinniest I had been since high school- my tummy was flat again, my thighs had slimmed, and my breasts had deflated a bit. I was able to fit into a size four pair of pants, which still boggles my mind in retrospect. In addition, I was having much stronger orgasms, because my core was stronger.

But I wasn't happy with my svelte body. I could manipulate it better, but I was constantly stressed, and pushing my body to its limits, trying to become a figure eight again. A few years back one of my close friends had told me that I was still in my cocoon and if I just exercised I would become a butterfly. That hurt to hear then, because I completely agreed with him. Now though, in September of 2012, I was finally slim enough to be acceptable. I ran into my friend, and he told me I had finally become a butterfly. And I laughed, but I thought back to how much less stressful being in a cocoon was.

Beyond having stronger orgasms and running, I wasn't really enjoying my slimmer body. I didn't suddenly feel confident or beautiful, and people weren't falling over my feet. I had the most unrealistic expectations around losing weight, and they were being shattered. So when the school year started back up, I didn't make time for working out, I just let it slide. I decided to finally apply the body positivity to myself, and not just everyone else. And it worked. Somehow I began to enjoy having my body again, and I had confidence in spades. If someone really thought there was a difference in my attractiveness due to twenty pounds, then I didn't care about their opinion anyways.

But now it's January. And not running has created a little pouch, and my size twelve pants feel a little too tight. And my orgasms just aren't as strong as they used to be. And although I still feel sexy, I also feel lazy. So this year, I'm going to pick up running again. Not obsessively, and not with the goal of returning to my high school body. Instead, after every run I will treat myself to an orgasm or two. And perhaps for fun, I'll run with my smartballs teneo duo in me. Because this year, I want to feel good, sexy, and active in my body. Mostly though, I want my stronger orgasms back.

So to anyone who's trying to lose weight for the New Year, I hope you examine what you think you'll get out of losing the weight. Is it for you or someone else? Do you have an end goal? Also I would highly recommend orgasms post-work out- you want to be dirty enough for a shower, right?
Tags:
Views: 1260
Related articles