Passing under the Trans*-Dar: a definition of "Passing" and how it relates to those in the trans* community 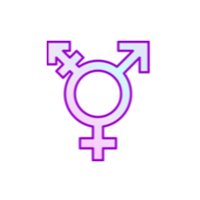 http://commons.wikimedia.org/wiki/File:A_TransGender-Symbol_Plain1.png
Passing is great for those trans* people who do, but for those who can't manage to look how society expects, people using the term "passing" can leave them feeling like Pinocchio-- wooden and fake and without a fairy to make them *real*.

"Don't go in the men's room. It isn't funny. If you are making zero effort to pass as a guy, then it is really unfair to men whose space and boundaries you are invading."

— A Very Close Friend Who Felt It Their Place to Gender Police My Body, 2012

To break it down, “passing” is a word used in the trans* community to show how you're being perceived as the gender you identify as.

Let's use an example.

“Despite how tall she is, she's “passing” really well! No one even knows what she is biologically.”

That's nice! This person is male but passing as female and no one suspects a thing!

Wait, that's not what the person speaking meant to say. No, no, they didn't mean to imply that this person is tricking anyone else into believing something that isn't true. That's not what they meant!

This is where we get into tricky territory.

In the usage above, "passing" implies that the person is tricking others, that they aren't really what they identify as. They're going under the gender radar, so to speak, and managing to not make everyone aware of their biological gender. That even though they may have different parts from the gender they identify as, they're able to keep that under wraps and make others think otherwise. They're able to use makeup, surgery, and other changes to their voice, body, and clothing to fool others.

Maybe it's not the intent of the speaker to be saying these things. It's not saying the speaker is bad. They meant it as a compliment! But it's like when someone says, "You actually look pretty today," or, "You lost a bit of weight, didn't you?" It's a bit of a back handed compliment.

While some trans* people, both men and women, find “passing” an acceptable term, there is still heavy debate within the trans* community. For those who do “pass,” it can bring a sense of elation when others do not misgender you. The term is less pleasing for those who do not, maybe will not, or cannot, "pass." It can be a slap in the face as to what their gender is and what others will ever identify them as when they are told they do not "pass" well enough.

As a trans* man, I know that feeling.

When you say passing to a trans* person, it's all well and good when they pass well as the gender they are.

But I'm not alone in having friends and family alike come up to me and tell me how to better be a man by using ace bandages, which are super harmful, or dressing more manly. I'm just not “passing” well enough and seemingly making no effort to look like a man. I'm too feminine, I have too large of breasts, and my stride is too feminine. I just don't look the part, no matter how I act it, because it's just acting. Some of these people don't and won't see me as male, but as a female pretending to be male who just isn't acting well enough and doesn't have the right body to fit the costume.

I am not the only trans* person who experiences this. Looking on trans* support sites and in communities dedicated to those who are not gender normative (and who decides what is normal?) you can see numerous articles and threads devoted to understanding that not passing does not make you less of the gender you are, and that passing doesn't make you somehow better than other trans* people.

I don't mind when people use the phrase "pass." It doesn't bother me.

It's when “passing” becomes the test I have to pass before I am given the permission to use the right bathroom in a public place that I get testy, so to speak.

Ultimately, "passing" is another phrase that puts up a wall of Other around trans* people. You can't just call me a man, you have to say “trans*” man. And that's the thing. "Passing" by itself can bring a wonderful sense of elation to those who feel they are actively able to "pass," that is, not be misgendered in public or with friends and family.

But when you can't "pass," it feels like you're less than. You're not even a trans* man, and you'll certainly never be a boy like Pinocchio was at the end. There is no fairy wand you can tap on your body to make you grow taller and lose your breasts and hips, unless you spend thousands of dollars on surgeries that you shouldn't have to have. When everyone is focusing so much on how other trans* people are passing, and therefore maybe really finally do get to be the real gender (hooray!) those like me and others who can't afford surgery, or don't have safe ways to get to doctors and get hormones are left feeling quite wooden.

I don't mind the word "passing." I just don't like how it comes with an opposite. It comes with a "not passing" and a not desirable tag attached with "not passing."
Tags:
Views: 1366
Related articles

Cas A Nova
I'm not nearly new on the scene. I might be just 19, but I certainly have been playing with toys of my own creation since I was much younger. I believe in open sexuality and fluid, rather than solid, gender roles. I plan on getting as in tune with my body, alone and with others, as I can over my lifetime and I know that toys here and elsewhere will be able to help me out on that.