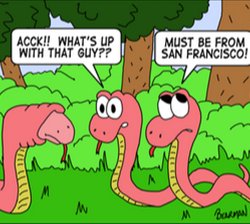 http://armstrongismlibrary.blogspot.com/2011/10/cutting-it-off.html
My wife and I have just had our first child. With his arrival, the biggest question besides "is he ok?" was, "are you getting him circumcised?" Yes, but was it medical relevance or just our preference behind the choice?

To Circumcise or Not to Circumcise? Seems like the question, when you are born while everyone is staring and admiring how precious you are.

Our little boy, as we watched the birth and saw the doctor lay him on my wife, we all stood around admiring the preciousness of our little baby boy, who lay there relaxing in his mother's arms. Once he was weighed, all body parts were counted, and they cleaned him up, there was still one more thing to do: we needed to make a decision on whether or not he should be circumcised. All I knew was, it's just the thing to do. Though the real question is, was there a medical relevance or was just an unneeded procedure?

Well, after a little bit of research and a pamphlet the doctor gives you before you leave the hospital, I think I have come to my opinion. Still though, this is something that is preference. It isn't required or necessary if that is how you feel. I only want to give you a little more understand and a little more insight on being circumcised or not being circumcised.

Pros Along With the Cons

Does being circumcised have any medical relevancy over being uncircumcised? I believe after reading and looking over a few different articles and information, that there is good medical evidence to the positive effects of being circumcised.

Some of the deciding factors that helped us to choose were: circumcision can reduce the chance of problems like phimosis and posthitis, these problems are where the foreskin becomes stuck over the penis and doesn't retract. Another reason that helped us to choose circumcision was the reduced rate in Urinary Tract Infections(UTI) and some Sexually Transmitted Infections(STIs). The reason that these diseases are less susceptible, is something called keratin. Keratin, is a cell type found on the outermost layer of the skin. It is a protective barrier, that protects against pathogens(bacteria, fungi, parasites, viruses), heat, UV radiation, and water loss. This protective barrier in studies is shown to protect against diseases such as HIV, genital herpes, genital warts, penile cancer, and cervical cancer in women. Even though I hope that my son doesn't ever have to worry about getting STIs or cancer, I do believe in preventive measures.

Other good reasons as to why circumcision is beneficial is because the foreskin also heightens the risk of getting infections. Some infections that you can get are phimosis, paraphimosis, balanoposthitis, and meatitis. What can happen is the foreskin can obtain abrasions that can promote inflammation, which allows the virus to come in contact with immune cells. The foreskin also contains cells called Langerhans, which can aid the transportation of the HIV virus. The cells can also transport the HIV virus, to the lymph nodes.

All of these reasons, helped us to make our decision on whether we should circumcise our newborn baby boy. Many different studies have been done showing plenty of relevancy to having this procedure done. Whether you are a newborn and your parents have made the decision or you are an adult who has weighed the pros/cons yourself.

Our View and Choice

After continuing to do more research, I noticed that some of the precaution against becoming circumcised was that circumcision has been looked at as mutilation. Many people also believe that circumcision is the choice of the child and shouldn't be done until the child has come of age. These thoughts are completely relevant and can be taken into consideration if this is something you have had thoughts about.

My wife and I actually took the time to weigh the options. I must say the only reason that we did look more into it wasn't because we thought that it shouldn't be done, but because they had to wait a week before being able to circumcise our son. On that note though, I am glad we were able to read more about circumcision and make our own decision. Not just saying, "Oh well I am circumcised, so he must be" this isn't necessarily the way to go about it. I think you should do your own research and search yourself to make that decision.

As for the topic of mutilation, I don't believe whether you make the decision for your child or you get circumcised as an adult it is mutilation. Honestly, even after all this research my wife and I still see it as a medical procedure that isn't misconstruing any part of the anatomy. It is one of the oldest known procedures today and some of the ancient civilizations utilized the procedure. One of the oldest known civilizations, the Egyptians, saw circumcision as a purification for the body and associated it with those committed to spiritual and intellectual development.

In conclusion with all the information that we had learned, my wife and I didn't see circumcision as mutilation or a decision that has to wait. Although, if that is your choice on allowing your child to make that decision when older. We have just chosen to make this decision for him and in our opinion a very good decision. I just leave you with this in closing, do your research. Decide what you believe is right for you and who you might be making decisions for. Unfortunately, still in this day and time there is only a minimal amount of evidence that shows circumcision is a positive.
Tags:
Views: 1631
Related articles