Why So Squeamish About Sex Ed? 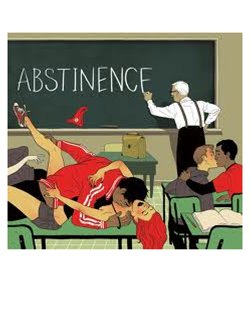 © Asaf Hanuka http://politicalirony.com/2008/09/05/is-abstinence-only-sex-ed-working/
We have the freedom in America to choose how we educate our children, but many schools and parents avoid educating children about sex. Of course, we have to teach kids about sex in an age appropriate fashion, but why are we so squeamish about sex? Why ignore the fact that schools are saying "abstinence only" and getting away with it? We're choosing to stay in the dark in a nation where we have the freedom to learn, and quite frankly, it's unacceptable.

"Life in Lubbock, Texas, taught me two things: One is that God loves you and you're going to burn in hell. The other is that sex is the most awful, filthy thing on earth and you should save it for someone you love."

America has such a thing as comprehensive sex education, and many schools try their best to fully educate their students about sex, its consequences, and the protection you need to prevent pregnancy and STDs/STIs. I was one of the students fortunate enough to attend a school that let me know what would happen to my body during puberty, and gave me a wealth of information about sex. Granted, I didn't learn much about sexuality and gender issues, but I was pretty lucky to have the information given to me by my public school system from elementary school on up through high school.

The unfortunate fact of life is that more often than not, children aren't given the information they need about sex. Anyone that knows about their own privates, namely any child old enough to be potty trained, has some idea of where babies come from. We might try to tell our kids “the stork dropped you off on the doorstep because your father and I wanted to have a precious little girl/boy like you," but a more age appropriate response would at least include the fact that children grow inside your stomach. Eventually, through the media or any other “Ah-Ha!” moment, kids will find out that babies come from sex. So why at the age of 18 have some kids never been directly told about sex?

It’s not just the school’s fault, but the school has a large part in the ignorance we are passing on to our kids. As an aspiring educator, I know that schools have to appeal to the morals of families, and some families are completely against teaching about sex in schools. In fact, according to an article published in 2011, more than half of parents think schools should ignore the topic of sex education completely. Other parents approve of schools that teach an abstinence-only curriculum, while a select few parents actually care or know to look for schools that are comprehensive in their approach to sex education.

A school that is comprehensive in sex education will ideally teach about sexuality, most commonly the fact that some men/women are attracted to the same sex, and about contraception, but they will also thoroughly explain that abstinence is the only 100% safe way to prevent pregnancy and STDs/STIs. If you want more information, I recommend visiting the Future of Sex Education (FoSE) website, where you can find downloadable standards and rationale for K-12 comprehensive sexuality education initiative. For the safety of LGBT students, and for the general knowledge of young adults, comprehensive sex ed ensures that parents aren’t alone in the process of teaching their kids about sex. When parents and schools work together, a child can go to school, learn the facts, then go home to ask their parents and family members what they think about the information.

Before I start discussing my own beliefs, let me say that I do not think comprehensive sex ed will save every student from making bad decisions about sex, but ignorance is not bliss when it comes to sex and our bodies. Suppose you had never learned about a condom, but you want to have sex. Chances are you aren’t going to do your research five minutes before you lose your virginity. Having the information given to you early and often will make young adults more likely to prepare themselves for the inevitable sexual encounter, whether it happens at 16 or 26. Knowledge is power, and we deserve to take advantage of our right to be informed.

In my own experience, buying condoms for the first time was completely embarrassing. I was only in high school, and even though I knew protection was the right way to go about having sex, I felt as if somebody was going to judge me for protecting myself. I was afraid to ask my mom, simply because I didn’t want to admit I was having sex at 17, and I definitely didn’t feel comfortable walking up to the drug store counter to buy them. I did it anyway because I was well informed about the risk, and had I not known how important condoms were, I probably wouldn’t have tried at all. My boyfriend at the time didn’t even come in with me to buy the condoms because he was ashamed!

Why, in America should a person feel ashamed of protecting themselves, and for doing the right thing for themselves? We don’t feel ashamed about doing well on a math test, but utilizing our knowledge about contraception is a taboo; people act as if abstinence is the only way, but in practice we all know that hormones can get the better of a teenager. Wouldn’t parents rather have their child using condoms than coming home crying that they are pregnant, or that they got someone else pregnant, because they were unprepared? So if we expect young adults to do the right thing, they should be well versed in what the right thing is in every situation.

Ignorance to sexuality and sex causes terrible things to happen. Teenage girls get pregnant far too often because they weren’t aware of the serious consequences, or because they were ashamed to ask about how to prevent pregnancy. People contract and spread STD/STI’s that might never be cured because they are ashamed to get tested or use a condom. Sadly, LGBT students are bullied, killed, and commit suicide because they are harassed and ashamed of their own sexual identity. All of this could be prevented by talking to our children and informing our children little by little from birth to adulthood about being comfortable with their sexuality and being careful about sex. We cannot always prevent bad things from happening, and we certainly can’t guarantee that sex will never be embarrassing for anyone, but blatantly refusing to educate kids about sex related issues, either in the home or within the school, is a huge roadblock to making progress. Sex isn't a dirty, awful thing; in fact, it's the attitudes towards sex that are disturbing. We have the right to be educated in America, and choosing to keep kids in the dark when it comes to learning about sex just goes to show how much we take our basic freedoms for granted.
Tags:
Views: 1991
Related articles

hmb12
I am a college student looking to learn and try new things. Whether I'm checking out new toys, bath products, lingerie, or just reading articles I find Eden Fantasys to be a really educational and exciting site.
You'll find me on forums a lot. I'm always curious to see what people are talking about.

Other articles by hmb12