America Should Vouch for Gay Marriage. 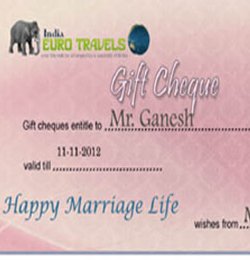 http://www.indiaeurotravels.com/GiftShop.aspx
Gay marriage won't be legal in all 50 states until 2024 at the earliest. What if there was a way for gay people to get married in any state, while keeping it convoluted and maintaining gays as second class citizens? That's what marriage vouchers can do!

Marriage and Its Institutional Trappings

Despite three states voting to legalize gay marriage after the 2012 elections, the United States doesn’t appear close to nationwide legalization. Unless the Supreme Court decides that prohibiting same sex marriage is unconstitutional, it will take until 2024 for all fifty states to be prepared to legalize gay marriage, according to Nate Silver of 538. While the opposition to gay marriage is complex, the largest groups opposing it are social conservatives and Republicans, which means there might be a way to appeal to them through their love of the free market.

The right of marriage exists within larger entities. Whether it’s the church or the government, they’re the ones who recognize marriage and dictate its terms and the benefits. Instead, it would be better to take away the collectivist institutional monopolies on marriage and restore it to the public through marriage rights exchanges.

Instead of institutions, every person should be bestowed with the right to marriage in voucher form, with the option to be gay married if a person has two vouchers. Each voucher would be issued at birth, include a personal identification number to prevent fraud, work in all states and be transferable any point after reaching the legal age of marriage. The voucher system would allow gay marriage in states which likely won't legalize gay marriage for decades, such as Mississippi and Alabama, but it would also benefit people against gay marriage, since gays would need twice as many vouchers as straights.

There are numerous economic benefits to the voucher system. The right to marry is a powerful commodity that won’t go cheap; it represents tens of thousands of dollars in tax breaks, benefits and social status. For those who do not desire marriage, they could sell their vouchers for hundreds, if not thousands of dollars.

This would create economic equality between singles and the married, as well as straights and gays. Currently the government provides tax credits for couples filing jointly that aren’t available for singles, the “Hope and Lifetime Learning Credit," which deals with student loan interest for example, along with a litany of tax credits for parents which benefit straight and married people more, for obvious reasons. Not to mention the right to inherit a spouse’s pension, hospital visitation rights, family coverage for health insurance and numerous other benefits.

On the other side of the equation, the taxes of childless people, predominately single and gay, pay for education, benefits they do not see directly. Granted, there are benefits to educating the future generation, from perpetuating civilization to preventing crime by having an educated, trained workforce, but parents get these benefits too, along with the education of their children. These vouchers would be a wealth transfer from the married to the singles and restore financial equilibrium.

Money would go from the more financially secure gays and the wealthy who sold their vouchers young, but regret it, to the precarious singles. Allowing those unmarried and childless people to cash in on thousands of dollars at any moment through selling their voucher will boost the economy. The time, effort and risk necessary to start a successful business often isn’t compatible with family life. It’s a task better left to singles who don’t have to worry about the well being of a spouse and children.

Even if those willing to sell their marriage vouchers aren’t entrepreneurs and innovators, they would still benefit from having the option to sell their voucher. If the economy worsens, or monetary emergencies such as health problems pop up, there's always that backup. Having a safety net may lead to more risk-taking and innovation, improving the economy.

For those who aren’t interested in getting married, there’s an enormous benefit to selling their voucher early. Just like getting a vasectomy or hysterectomy young closes the door on children, selling the voucher closes the door on marriage and prevents the future self from changing its mind. No matter how much someone protests the idea of marriage, there’s no way to close it completely, but this comes about as close as possible.

Of course it doesn’t completely close the door, which will show how valuable the vouchers are as a symbol of love. Weddings, rings, jewelry and the like are not symbols of a person’s love, but their wallet. Spending thousands, perhaps tens of thousands of dollars just to purchase the right to get married would be a grand romantic gesture of epic proportions.

While perhaps complicated, this may be the best way forward for gay marriage. It creates economic incentive and opportunities, takes gay marriage national without disrupting straight’s status as the privileged class and gives anti-marriage people the easy out gays have been hoarding for thousands of years. The only other way for gay marriage to happen would be for Congress to pass legislation that grants them the right to marry, but the voucher system seems more plausible.
Tags:
Views: 1499