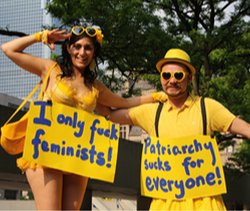 By Loretta Lime (some rights reserved; http://creativecommons.org/licenses/by-sa/2.0/deed.en)
Think feminists don't like sex? Think again. One feminist's discovery of sex positivism.
It’s practically inconceivable to me that any intelligent woman (or man) would not consider herself/himself a feminist, but this is a recent thing for me. Just a few short years ago, when asked point blank if I was a feminist, I said no. This decision was not made for unintelligent reasons. I’d read Robert Bly’s Iron John: A Book About Men. I knew that feminism castrated men and even took away women’s ability to be free sexually. The word “objectification” got thrown around so often after all, and frankly, I liked dressing skanky now and again, and I didn’t want anyone to tell me that was wrong.

As for the person who asked me about this, well, you could just see their opinion of me and my intelligence drop just like that. In a snap, I was no longer this smart and admirable young woman; I was a woman-hater. Just like feminists were man-haters to me.

I did not change my opinion then. That particular man did not convince me, and yes it was a man who confronted me about this first. I had my beliefs, and I believed that women should be able to do everything that men could, but I thought of those goals as already having been accomplished. Any additional acts of “feminism” were just trying to make us superior or a certain kind of woman, the kind of woman that was only about her career. The kind of woman who couldn’t be a wife and mother, as I wanted to be someday, and if that, then certainly not a housewife.

Now, I have to try very hard to stop myself from judging people who don’t identify as feminists as woman-haters. This has been a leap for me, a leap of which I am intensely aware. The difference between old me and new me and, I imagine, between me and those of you who believe women should be equal but do not believe in calling yourselves feminists, is largely in the word. Because feminists are sexless, bitter, man-eating, hairy, gender queer, angry weirdos...at least in the popular imagination.

You probably know at least one person who fits this description. I know I do. What I have to tell you about myself and about feminists everywhere is that this is not who we are, what we are, or all we are. Some feminists are hairy because everyone deserves to have their own grooming preferences. I personally shave every day, but I don’t hold anyone else to that. Some feminists are gender queer because, frankly, the gender queer folks have even more to fight for than the average woman, so yeah, they can be pretty active. Personally, I’m straight (but an ally) and identify as female (both in sex and gender). Some feminists are even bitter and angry because being a feminist sometimes feels like you’re donning these special glasses and you can suddenly see how badly certain people are being treated for no apparent reason, and whether you’re a feminist or not, you have the right to be angry about that. Sure some of us are some of these things because we’re all people, and these are things that people can be, but these things in themselves are not feminism. Feminism is not all of this.

I can’t cure all of these misconceptions for you at once, so I’ve picked just one. Feminists are not sexless. In fact, if anything, sex is a unique talent of feminism.

The first thing you have to understand about feminism is that not all feminisms are created equal. Right now we are in third-wave feminism. This has been going on since the 90s. That means that we’re not the same people as you saw burning bras in the 70s. We’re just not. I personally like bras—the lacier the better. That’s not to say that all third-wavers are talking about sex on Eden Fantasys. There’s another offshoot within feminism called “sex positivism.” That’s feminist code for people who believe that sex, when it’s absolutely consensual, is a great thing. Some of us call ourselves “sex pozzies.” Some of us write articles on Eden Fantasys. In fact, SexIs is, just by being a respectful, open forum for this kind of thing, inherently a sex pozzy zine.

There are people, and not just in America either, who speak up for your right to good equal sex. Take Pussy Riot, for instance. They’re a Russian band who got thrown into prison for being too awesome in an activist, feminist, sexual way. Take the Slut Walks that started in Toronto to protest victim-blaming in cases of rape. As long as it’s consensual sex, we love it.

We talk about it. Heck, we blog about it. We make consent hella sexy because, when we have sex, all parties know exactly what the other is in for, and as long as all is cool, all parties get what they came for.

This is not, three years ago, what I thought feminism was, and again, it’s not all feminism is, but it’s what feminism could be. It’s something that feminism could do. Making sex safe and equal is, I think, a good cause because equality doesn’t just happen on the national political level. Equality happens everywhere, down to every last bedroom, and yeah, BDSM-ers, you can still do what you do, too.
Tags:
Views: 2213

Livia Drew
Just a girl in search of the perfect clitoral stimulator. My journey is your journey.

Other articles by Livia Drew