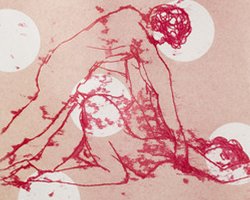 Now, I’m a woman, so the fact that I’ve chosen a literary pornographic site to feature on my profile comes with all sorts of assumptions. The foremost of these assumptions is that women are stimulated more by language than by visuals. The verbal vs. visual opposition has been much touted in magazines and media. I’m sure you’ve heard this oft-cited difference between men and women blamed, in at least a few sources, for husbands not being able to understand their wives, girlfriends not being able to understand their boyfriends, etc. Men are from Mars, women are from Venus. The Martians are missing an ear and the Venutians are blind in one eye.

Go ahead. Cry freak. I know you want to. But the truth of the matter is that the difference between verbal-women and visual-men has been highly exaggerated because, as with most so-called “empirical” gender differences, it’s easier to blame the brain than to develop more complex reasons for our gendered (interplanetary) differences.

Part of this comes down to differences in the ways that men and women are raised. The old nature vs. nurture argument. I know, but this is an important place to talk about it when every other study would have you believe in Martians and Venutians.

If the message doesn’t sink in through these channels and a woman tries to sneak into the men’s club, she’ll get over visual stimuli pretty quickly. Most of the pornography in the men’s club (especially the free stuff on the men’s club computer) demeans women and can make women feel as disgusting as visual pornography is supposed to make us feel. The knowledge that the woman is in no way as into what she’s doing as she’s pretending to be is a complete turn off, and the porn is almost never about the woman’s pleasure anyway; it’s about the man’s. And as for the man, his body is barely in the camera shot. That’s if his body is worth filming to begin with.

The result, of course, is that this woman’s Eden Fantasys profile is porn-less, and what a sad thing that is. What you can do to fix this is to pay attention to what you want instead of what the girls’ and women’s clubs have trained you to want. If you still think porn is gross, that’s still fine and totally up to you. On the other hand, if you know or find out that the visual-verbal dichotomy doesn’t work for you either, post your finds on your profiles and in the comments. Your fellow pornographic tomboys will love you forever.
Tags:
Views: 2306

Livia Drew
Just a girl in search of the perfect clitoral stimulator. My journey is your journey.

Other articles by Livia Drew