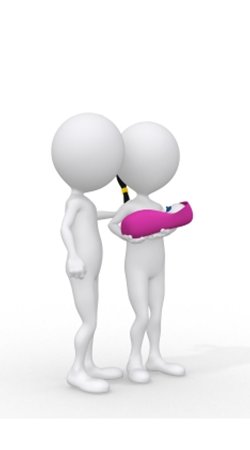 FreeDigitalPhotos.net
Living through sexual abuse is extremely difficult, but what if you're not abused in the way others would think? What happens if that person lives with you and is close to you?

"Sexual abuse comes in many forms and causes great damage. I wasn't physically molested myself, but had to deal with a lot of pain associated with it from another perspective."

Babies are all born completely pure. They have no understanding of what the world is and how it can affect them. They only know to cry when something isn't right and take comfort in the person who feeds, changes, bathes, and gets them to sleep. They are 100% vulnerable and have to depend on the people who are there to care for them. I was born as an innocent baby girl, depending on my parents to nurture and take care of me; but not everyone is cut out for that job.

A father waits eagerly in the delivery room for his precious baby to be born. He paces back and forth, offers a supportive hand to squeeze, and waits some more. When the time finally arrives, through sweat, pushing, and pain, the baby's head crowns and gives the first tiny glimpse of his offspring. The head emerges first, and then in one burst of strength, the mother delivers the remainder of the baby. Emotions overwhelm each of them as they hear the first cries sound. "It's a little girl!", the doctor announces, and they give each other a kiss and feel so overcome with love over this beautiful daughter that they created together.

Okay, so it might be like that for some people, but that wasn't the experience my mother shared with my father when I was born. I was the second and final child to my parents, surprise baby girl #2. Like many men, my father wanted a son. Someone to go hunting with him and work on cars with him, not some little girl that was sensitive and wanted to dress up like a princess. My sister and I were doomed from the start for the simple fact that we each had a vagina and not a penis. I wish that was the worst of it. I could have dealt with a father not loving me because I was a little girl, but things were much darker than that.

My first memory of life was when I was three years old. I remember watching my father get into my grandfather's truck and drive away from our house. Grandpa didn't come in. He just left with my daddy. I asked my mommy where daddy was going and she told me that he had to stay with my grandfather for a while. I didn't understand. I loved my daddy and I didn't want him to leave!

A few days later a strange man came to our house with a briefcase in his hand. He got down to my level and shook my tiny hand and my sister's and told us that we needed to talk about a few things. He opened his briefcase and took out a naked plush doll. He looked at me and told me that it was okay for me to tell him the truth and I wouldn't get into trouble for anything I told him. I was so confused and didn't understand what was going on. He asked me if my daddy had touched me in places I didn't like and if he had, I could show him on the doll where those places were. There weren't any places to show, and my sister said the same thing.

I lost my innocence in those few years that followed the strange man's visit. My father had been convicted of molesting a nine year old and an eleven year old that were sisters and friends of our family. We all had to go to counseling and the dynamic of our family changed very suddenly. My father couldn't be trusted with his own daughters and my mother was solely in charge of caring for my sister and me. We were so little and didn't understand the depths to what had happened, but it would change us for the rest of our lives.

My father was able to move back into our house after nine months of living with my grandfather. My mother chose to stay with him, even after everything had been revealed. Many rules were established that made being a child difficult. I couldn't be carefree and run around and play like I wanted to. I had to be careful of the way I dressed, what I said, and how I acted; I was just a little girl! But even after everything that had happened, I sought after his attention. I wanted him to be happy with me, I wanted for it to be okay that I wasn't the boy he wanted. I tried to do the things he did, tried to help him work in his garage, learn about guns, and listen as he would ramble on and on about his latest project. But it never mattered. I was lacking in his eyes, because of my gender.

As time went on I was able to understand more what had happened. I didn't get to have sleepover parties with my school friends, we couldn't go to the beach and go swimming, tank tops and shorts were a big no. I couldn't even take a shower if my mother wasn't home. I began to live in fear because of the man who was supposed to take care of me.

My sister and I begged our mother to leave him, but she didn't have the support she needed to move forward. She felt stuck, and that in turn made my sister and I live in our bedrooms to separate ourselves from it all. We were angry and bitter with her for staying. This man was an angry person, selfish, callous, and couldn't be trusted.

I finally had an out when I was 15 years old. My father had been keeping sexual things hidden from my mother and she finally caught him on it. He moved out of the house and I was able to make the choice to remove myself from him and his burning stare for the rest of my life. He tried to keep in contact with me, but I ignored his attempts. He wasn't there for me when we were a family, I didn't need him in my life any longer.

Sexual abuse comes in many forms and causes great damage. I wasn't physically molested myself, but had to deal with a lot of pain associated with it from another perspective. I was abused, just not in the way most people would think when they hear the words 'sexual abuse'. Your gender shouldn't define you. That's a lesson I've had to learn through the years.

I refuse to give my father credit for the hell he put me through, but I can take away a little bit of positive from my experiences. I'm far more vigilant when it comes to my children's protection, and know how to properly raise a daughter based on all the things he wasn't and didn't do for my sister and me. Will my daughters be raised perfectly, absolutely not! But they will never be subjected to living in a cage, in fear, or hidden because of their gender!

How does this affect me now? How have I been able to get past it all? That's for another day and another article.
Tags:
Views: 1022