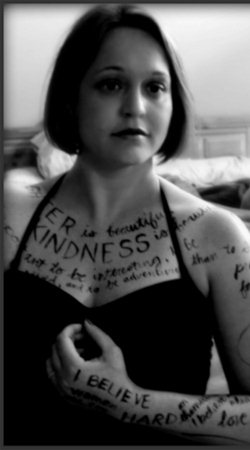 http://thebloggess.com/wp-content/uploads/2009/06/picnik-collage1.jpg
In honor of International Women's Day I'd like to share two women who have had a profound influence on me. I first wrote about Amanda Palmer. The second, yet equal in influence, is Jenny Lawson/The Bloggess. Her battle with depression and anxiety while being courageously true to herself has greatly influenced me.
I wanted to write an article about the women who inspired me in honor of International Women’s Day. I had chosen two but I couldn’t fit both women in one article. They are both such amazing ladies they barely contain themselves to a single post. I previously wrote about how Amanda Palmer inspired me. The other inspirational woman is Jenny Lawson, The Bloggess.

Sexis Magazine fans will know her for the hilarious column she has on the site. I didn’t find her through Sexis, though. It was from another mom who is a friend on Facebook. Around the time that I was discovering Amanda Palmer this friend happened to post a funny picture of a large metal rooster. I just had to click and found the sidesplitting post “Sometimes You Have to Pick Your Battles” and said large metal rooster with the hilarious title “Knock Knock Motherfucker.” This was my first Bloggess post and I laughed so hard I knew I had to read more. Her blog was so much fun to read I started following her on Twitter. I soon began to realize she was more than just silly pics of giant lawn décor and amusing blog posts.

Jenny is someone who has taken the burdens in her life’s journey and shared it with everyone. She took to the internet to talk about her struggles and to share some funny stories. She grew up dealing with an almost debilitating anxiety disorder and battling depression. While she deals with most of it through therapy and some medication, it’s never completely gone. Her posts reflect this. Most days she shares her crazy exploits, funny conversations with her husband and her predilection towards stuffed dead animals. Other days she shares her pain, her struggles, and her darkest moments. The more I discovered about her, the more I saw parts of myself.

I so enjoy her Sexis posts, although they are few and far between these days. Her Sexis bio starts with “Sex is funny. Except clown sex. That's fucking terrifying.” Her posts looked at some of the most ridiculous things found on the internet, from the silly to the disturbing. It is always with a giggle or even an all out guffaw. It reminds me that talking openly about sex is not all about education, safety and consent all the time, although these things are vitally important. It’s also about finding the humor in it. Take a good look at some of the stuff going on out there. Bizarre porn, odd sex toys, unusual fetishes, advice from Cosmo (which is scary and disturbing) all make sex fun and fascinating. It’s our inexhaustible imagination at work. Humans are downright wacky sometimes.

Her writing has shaped my life since that first post. Early on I was touched by her honesty in fighting depression. Having battled with it myself I always felt like a failure because sometimes I got the bear but sometimes the bear got me. Jenny reminds me that depression is a liar and it’s always an on going battle. Some days you’ll stumble or collapse during the fight but never forget that you can bounce back from dark days. She showed me the importance of having a community around you for support and that it’s ok to share the crazy, sometimes dark, thoughts in your head. It’s good to release those things. And having a good support group is essential. Even if your support group is people you only know through Twitter.

I admire her honesty. She openly admits that sometimes she doesn’t think she really knows what she is doing. She’s honest about her insecurity with her body image, with her shyness, with her inability to not say something inappropriate in uncomfortable situations. As a parent I can identify with her adventures as a Mom trying to navigate a world that seems to make it impossible for us to do an adequate job. She’s shared pictures of her art, of her wacky yard sale finds (often taxidermied and bizarre), and her troublesome cats. I was astounded by the photos of the dollhouse she’s been working on because I have always wanted to make one but never made the time to do it. Always found some kind of excuse like no time, no money, no space. Her doll house is a goth girl’s dream. Someday I’d like to follow her lead and make one for myself. You know, when there’s time and money and more space. Need to tack that on my Plan A.

Jenny has helped me think about body image, confidence and self-esteem. Another significant post for me was about photos taken of Jenny covered by the written words of Katherine Center and photographed by Chookooloonks for “Everyone is Beautiful.” Katherine painted the words to her book’s final paragraph on Jenny’s body. Jenny looks both beautiful and bashful. Her post not only tells us about these photos, she reminds us to tell someone that they are beautiful. She also celebrates beauty in the “traveling red dress.” She took photos in a gorgeous red gown then passed the gown on to others. She encouraged them to take photos in the dress, to appreciate their own unique beauty. The dress became a symbol of self-acceptance and love. And, just like with Amanda Palmer, an example of a community that is mostly just online can contribute significantly to each other.

She’s also a champion for mental health. She’s been honest about her fight with depression, anxiety and self-harm. Each time she has shared this fight with all of us the community is inspired to keep fighting, or even to begin the fight after giving in for so long. She shared a quote that’s become very important to me. It’s by Plato. “Be kind, for everyone you meet is fighting a hard battle.” She points out that many people are fighting a battle that you just can’t see. There’s no sign on the outside to warn you of the struggle within. Again, a reminder to be good to each other and to hold back judgment when you have no idea what is really going on inside the person. I keep these things close to my heart and try to help others who are fighting the good fight too.

Pursuing your dreams in the face of your fear is what I admire most about Jenny. She’s become a successful writer with a huge following even though she often deals with so much anxiety at public events she has to hide in the bathroom. Jenny is a big fan of Amanda Palmer and shared the song “In My Mind” at the end of a heart rendering and honest post. She said she watched it often as a reminder, now I do too. It reminds me that most of what I perceive about myself is false, a construct of the part of my mind that likes to lie to me. She reminds me that when you embrace those things about you that you think are flaws, you find a wonderful world of people ready to accept you and love you exactly the way you are.
Tags:
Views: 1429
Related articles

Technogeisha
Technogeisha was initially just content to be a voyeur in a virtual world. To her surprise she found an amazing array of people who inspired her to open up personally, creatively and sexually. No longer the voyeur, she is now using a passion for writing and research to learn more about all aspects of open relationships, sexuality and sex positive parenting. She looks forward to sharing her passion and discoveries with all of you.

She is managing editor and a writer for “Life on the Swingset” at lifeontheswingset.com. She also has been a contributor at SexLoveJoy.com, SilenceCupcake.info and Mindchaotica.com. She is a of member, and emissary for, Sex Geekdom LA.