Pinks and Blues. Colors are Colors. 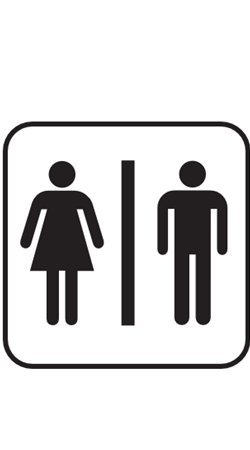 Makeup, Videogames, Nail Polish, Cookbook, Cologne. I bet you know which sex each of these items belong with.

"Different levels of hormones and a single extra or missing chromosome dictate that I was born a female rather than a male like my brothers. My clothing, toys and most everything I own has been dyed or cut in a certain way to emphasize this chromosomal trait. At the most basic level, my body, my childhood dolls and clothing all come from the same place as my brother’s."

Gender and its Influence

We all know the differences between the sexes. We know that boys have penises, and girls have vaginas, and somehow the two body parts must never be shown in public. But what about our similarity’s? Somehow these get left out when we are given the “Birds and Bees” speech by our parents.

As a little girl, I was given Barbies to play with while my brothers were given G.I. Joes. The dolls are similar in structure, made of the same material and come with accessories. The only difference was that my dolls got high heels while theirs came fashioned with tiny machine guns.

I dressed up in my mother’s wedding shoes, while my brothers wore police hats. Our accessories were made of the same fabric and were too large for our small feet and heads. When I was a teenager, birthday letters would come in the mail bearing gift cards. Mine bore pink writing and would allow me ten dollars to Victoria’s Secret while my brothers’ would be all black and have a GameStop logo.

I was never jealous of my brothers, or them of me. We assumed this is how things were. The world was created with girly pink flowers and a manly blue sky. They wore the same clothing as I, received the same gift-cards, played with the same dolls. We just had these things in different colors and shapes.

Gender is extremely fluid. Is a little girl playing house that different from a little boy playing army? We both recruit others, whether that be to serve as the officers or husbands in our fantasies lives.

As an adult woman, I wear pants that are cut lower than my brothers’. Theirs cost a lot less than mine but overall they are made of the same fabric, and are usually created by the same company. For some reason mine are made to show off my butt while theirs are marketed as “rough wear,” not easily torn by a hard day’s work. The cotton that our jeans were created from was harvested in the same fields, sold to the same company and woven in the same way. The fabric of our lives is not so different, is it?

The public restroom I use has a picture of a woman in a tiny triangular dress. The bathroom my brothers use has an engraving of the word “man” with an accompanying picture of a stout individual with separated legs. Our bathrooms both house sinks, toilets and mirrors. Mine may have a tampon dispenser and theirs a condom machine, but other than that we use the same water and same brand of toilet paper. What a waste of space to have a wall separating us.

At the most basic chromosomal level, humans are inherently similar. Up until the ninth week of gestation fetuses remain undifferentiated. We float in a suspended state of growth waiting for hormones to dictate which way we go; male, female or intersex. Concentrating on the differences between individuals has led this society to become obsessed with the wide gap between the sexes. The gap between our restrooms, the gap between the toy aisles, the gap between the boy and girl shopping sections.

This gap is truly not so large. Different levels of hormones and a single extra or missing chromosome dictate that I was born a female, rather than a male, like my brothers. My clothing, toys and most everything I own has been died or cut in a certain way to emphasize this chromosomal trait. At the most basic level, my body, my childhood dolls and clothing all come from the same place as my brothers’.

As members of society, we are bombarded with items like makeup that will enhance womanly features, or the best shampoo for manly hair. My face is the same face as my brothers. My hair is the same hair as their hair. We need to begin concentrating on these similarities rather than the differences we hear about every day.

Yes, that’s right. We want YOU to write something for SexIs! See this forum thread for details and this one for this month's topics!