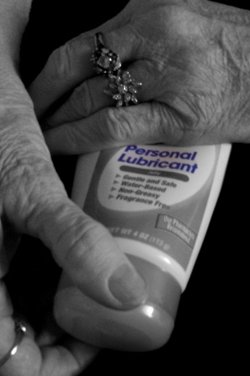 I know, I know, no one likes to think of grandma or grandpa getting it on. But let’s face it, your parents got here somehow, and the stork wasn’t the way. Like it or not, our grandparents, and theirs, like to think they invented sex. And nowadays, they are having it more than ever before.

Aging is not a disease, it is a progression. Sexuality and desire, the need for intimacy and love, or just a feeling of being wanted, don’t expire with age. In some, they may actually increase as emotions get more intense and/or fluctuate. A 2007 study of men and women ages 57-84 showed 78% of men and 40% of women had been intimate within the previous 3 months. I know people in their 30s with less of a sex life than some of these elders. With all of the products on the market today, it is now even easier for the geriatric crowd to tango between the sheets or the wheelchair. There are pills to erect, creams to stimulate, and lubes to, well, lubricate, and the list is getting longer all the time. Everything we use to excite and entice ourselves and our partners can and is being used to give our seniors a "leg up" so to speak.

So, why shouldn’t seniors have their fun? If they feel the urge, hop on and ride it out, because you’re not getting any younger! One day, we will be where they are now; so remember that the next time you feel like visiting grandma, call first. It wouldn’t do to catch her with her pants down!
Tags:
Views: 1280