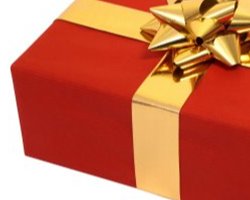 http://kidfocused.com/wp-content/uploads/2012/11/Christmas-Present-21.jpg
Are they accepted? or not...
Our folks are pretty relaxed when it comes to sexuality, and we are quite open about it, so in most cases sex toys would be an acceptable if funny present.

It would be extremely hot to receive something from my girlfriend – the kinkier the better! It would underline just how pervy she is, and how much she enjoys the same things as I do.
I think I would be ok with buying her stuff too – we talk a lot about sex and toys and stuff, so I kind of know what’s on her wish list. It would be extremely exciting, not just to watch her open the package, but to expect what is coming – imagining her using the new items, trying out her new toys, or asking her to put on those new fishnets, yum!

If I got something from brother or best friends- I would just laugh it off, and throw put it away considering it a joke. Until they leave – than I would add it to my collection! Just hope its not those fluffy flimsy cuffs, we have better, sturdier things to play with!

Once I got a chocolate flavored body paint from my brother and it was fun. Fun, but never discussed.
I would also buy them things, no problem. Like those fluffy cuffs, and a crop or flog for their girlfriends, to put them into their places! And I would never ask if they used it.

But the same is not true with people we aren’t that close to, or open with. I would probably risk getting dad some dirty magazines, but that’s were I would draw the line – everything beyond that is just waaay too creepy even to consider! Mum, not even a magazine. Just… not done. It was bad enough when they bought me condoms as a kid, to keep me safe. Now luckily I no longer need their permission!

And anyone who is even further away from family and friends – just no way!
Tags:
Views: 1339