What His Condom Choice Says About Him 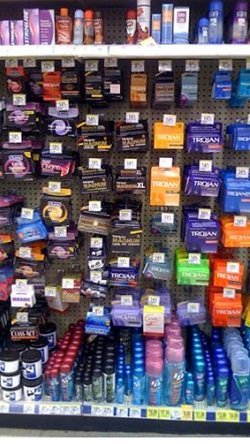 http://www.flickr.com/photos/jefframone/2355499887/lightbox/
More accurate than a horoscope, more judgmental than US Magazine, and more wrapped in rubber than a set of rubber band balls, this is an easy to access guide to what you can learn about a partner when they pull a condom out.

WHERE IT COMES FROM

Their pocket:
Well SOMEBODY was prepared. If you’re not dating this person, you should feel Really Special, because there’s NO way he used the pickup line “Well, I’m wasted but this condom in my pocket doesn’t have to be” on a woman whom he thought was much hotter but who turned him down. You’re definitely not his second choice, or his third, or even his only choice before he resorts to sexting his insane ex-girlfriend.

Their Wallet:
This guy likes to think he’s classy and prepared for the ladies, but men’s wallets are deep dark caverns of hot temperatures and butt sweat, which is a hostile environment for any condom. It has also probably been in there a while, probably as a good luck token. This is probably the guy who believes that girls can’t get pregnant if they’re on top, and also believes in Santa Claus and the One Eyed One Horned Flying Purple People Eater.

A Drawer:
If it’s a junk drawer, he’s probably a normal dude. Go forth and do the procreation dance, without the procreation part. If it’s a drawer full of condoms… Well, he’s probably just great and has never once told a girl he loved her to get into her pants. Ever. Well, maybe that one time but that girl obviously wasn’t as perfect or awesome as you are.

Unlubricated:
Unless your homeboy busts out a quality bottle of lube with these, it generally means he was so embarrassed that the condom display was in plain view of the pharmacy that he grabbed the first box he saw and ran his little legs as fast as he could to the self-checkout lane. When trying to shove his halfie in your mostly dry hoo-hah (dude who buys these is probably ix-nay on the fore-play), he'll say "But they're Trojans, they have to be good, right?" He is probably actually more likely to pinch the tip like he's supposed to, because he is more likely to have read the directions when he got them.

Extended Pleasure Condoms:
Well... at least he's honest with himself, and you. That's good. In case you don't know, these are condoms designed with a slight desensitizing lube on the penis side to help the man last longer. A.K.A. Minute-man, two-pump-chump, a guy who can't afford meds for his ED. Honestly? Probably a really sensitive guy. Wants to last longer for the girls he's with. Pretty decent choice for a one-night stand. (If you were expecting me to make fun of these guys... shame on you.)

XL, XXL, XXL wide:
There are two routes you could be going down here. Either it's the guy who THINKS he needs XL condoms, in which case the condom will most likely slip off and you’ll either get pregnant or need a trip the ER to have the condom removed from your cervix. Or he's an actually very gifted guy who doesn’t know that most normal condoms stretch to fit. Show him this, which will not only prove how much condoms can stretch, but also that he shouldn’t use 625 condoms at once at the risk of serious penis injury. It’s really a win-win.

Her pleasure / Ribbed / Studded:
Our natural first instinct here is to think this guy is very nice and very sensitive. Why would he buy condoms for your pleasure if he wasn't?
Well, I'm going to tell you. Because it is a lie. JUST LIKE THE CAKE.
A) He has a girlfriend, whom he bought them for.
B) He has an ex-girlfriend whom he bought them for and hasn't replenished his condom stash yet, which if it was recent means you're a rebound, and if it wasn't recent means the condoms are old and could break.
C) He really, really, really wants you to think he's a nice, sensitive guy, which of course means he is the exact opposite of a nice, sensitive guy. Condoms are just the easiest way to convince a girl of this before he goes back to being his regular ol’ douchey self.
D) They came in that gigantic "Party/Pleasure Pak" he bought, and these were the only ones that he had left. Again, they’re either old or, well, he used them all. At least he used them all with the 30 or so girls/sexual encounters right? It’s not like you’re looking for him to be your boyfriend or anything. Right? Please say I’m right.

I hope this (admittedly tongue-in-cheek) guide helps you in your pursuit of hot, safe sex. Always use a condom! Preferably your own.
Tags:
Views: 1987
Related articles