Why Are Some Forms of Attraction Deemed "Sexualities," while Others Are Philias? 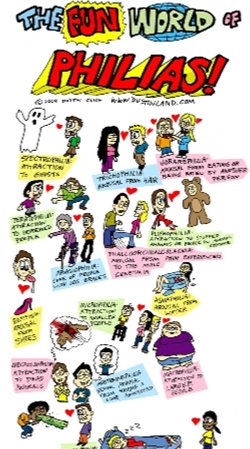 http://bitsontheside.wordpress.com/2008/09/29/illustrated-fetish-philias/
Pedophilia, necrophilia, zoophilia. What do all of these words have in common, and why do they often evoke a reaction of "ugh?" As someone whose biggest fetish is pregnancy and who fits much of the criteria of maiesiophilia, the terms "philia" and "paraphilia" interest me. Why are some forms of attraction deemed "sexualities" (such as homosexuality, demisexuality, pomosexuality), while others are philias?

What Is a Paraphilia?

According to the DSM IV (Diagnostic and Statistical Manual of Mental Disorders), paraphilias are characterized by "recurrent, intense, sexually arousing fantasies, sexual urges, or behaviors" that, for medical diagnosis purposes, should include at least two of the following criteria:

(1) non-human objects
(2) the suffering or humiliation of oneself or one's partner
(3) children or other non-consenting persons that occur over a period of at least 6 months.

Additionally, for diagnosis to occur, "the behavior, sexual urges, or fantasies must cause clinically significant distress or impairment in social, occupational, or other important areas of functioning." This is particularly emphasized in the DSM V, set to be released in May 2013.

What does all of this basically mean? If your sexual experiences are not normative, they are only okay until some mysterious clinical force says they are no longer okay; within seconds, your "behavior, sexual urges, and fantasies" become invalidated.

But what do these words mean exactly?

While I do not want it to seem as if these definitions are single and immutable, here are some guidelines from which to begin. Each of these paraphilias typically involve arousal toward:

Exhibitionism: The exposure of one's genitals or chest, or the act of publicly performing sexual activities.
Fetishism: Specific acts, objects, or situations.
Frotteurism: The rubbing of genitals against objects, for example, people. Similar to dry humping. Deriving from the French word "frotter," or "to rub."
Pedohilia: Prepubescent children.
Masochism: Receiving of physical pain or humiliation. In contrast to sadism.
Sexual sadism: Infliction of physical pain or humiliation upon others.
Transvestic fetishism: Cross-dressing, or wearing clothes of another gender. In contrast to homeovestism.
Voyeurism: The watching of undressing, sexual, or other activities.

Of course, many more -philias exist.

As an active member of a BDSM/kink community, and someone with a pregnancy fetish myself, I think that the listing of these paraphilias in the DSM IV, let alone any DSM, is ridiculous.

But what does this mean?

Do I think that they should argue, "We're just like you. We want nuclear families, to fight in the military, and gain insurance benefits just like you?" To assimilate into normative culture, which earlier was so rejecting? Absolutely not.

Why I Refuse to Assimilate

For a long time now, I have wondered: What is the difference between paraphilias and sexualities, and what does it take for a paraphilia to become listed as a sexuality? Apparently acceptance into normative, patriarchal, phallocentric, cis- and heterosexist, white culture; I do not want to simply say "acceptance into normative culture" because that leaves me thinking, "Well, which culture?" I mean the culture that determines someone's gender based on the cis-sexist notion of a penis, which then determines which "sexuality" they are based on which white-notioned gender(s), if any, they are attracted to. A culture that assumes attraction is present and straight until proven otherwise, and roots attraction in gender.

I do not want to be a part of that.

Of course, this is not to say that I do not believe paraphilias should be removed from the DSM.

Arguments against Removal of Paraphilias from the DSM

Some argue that support of the removal of pedophilia from the DSM may mean that sexual acts involving children will no longer be considered crimes. To this I ask, how also is ageism involved in normative sexual notions, but at what point also can you re-appropriate [italics|someone else's] consent?

Progress, but Not Nearly Enough

It is progress that the DSM V will likely acknowledge that paraphilias are not inherently mental disorders. However, more progress could be made if paraphilias were not listed at all.

Is it really progress that sexual experiences are okay until they are not, with "normative" (again, normative in the long-winded list way) never being questioned? No one says those experiences are okay until they are not; rape, argued a form of paraphilic coercive disorder, was denied entry into the DSM V, in part due to worry of misuse and lack of supporting empirical data.

It is interesting to note which sexual behaviors are listed in the DSM and which are not. In the past, hypoactive sexual desire, sexual aversion disorder, and female orgasmic disorder were not listed, but now they are.

I think it would be best if all sexual behaviors were removed from the DSM because much of it seems based on culturally established "taboo" notions, subject to change. I mean, the book itself is ever-changing and not only affected by "scientific data" (such as link between height, handedness, and number of siblings, most of which only examines men, possibly contributing to the belief that men have paraphilias more often than women, under the probable assumption that women can't have sex drives or ones nearly as high), but cultural repercussions, as noted by its decision affecting rape.

I am so done with all of this!

I do not identify as having a paraphilia.

The word in itself feels wrong (not in a taboo way, but an "I don't identify with this" type of way). I do not have maiesiophilia. I am not a maiesiophiliac. I do not care which way you want to put it.

I might consider that I have a pregnancy fetish, for lack of a better way to put it and need to communicate my desires, but I am slightly unsettled by the term "fetish" when it is only applied in non-normative situations, as if normative sexuality is the standard set way of being, with unquestionable desires.

Possibly, I might say that I have a pregnancy attraction and do not agree with paraphilias listing in the DSM, but I refuse to sell out and say that I am just like you, because I am not for as long as my sexual experiences make me feel unwelcome in this culture.
Tags:
Views: 1799
Related articles

fizzygato
What can I say?

I go to school, and love sex toys. Mostly vibration sort things, sensation play things, and anything ~typically trans masculine~. I think it would be cool if EF started carrying binders and clit pumps and more trans* things

I love trying new things and am willing to try most things at least once, but usually don't go out of my way to buy those, like just share with friends.