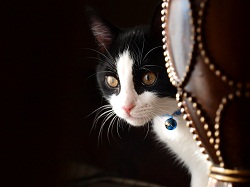 You have a cat, you know the deal: ownership goes both ways. Your furry companion has some ideas about when and how you should offer up affection, entertainment, and snacks. Often, those of us with cats fancy ourselves as the center of their universe, while they seem to think of us as personal assistants barely earning our keep—and that can make bedroom shenanigans complicated, to say the least.

Why Cats Love To Get Up In Your Business

Cats can often be aloof, reclusive, or even snobby housemates, so why is it that the barest hint of human slap-and-tickle seems to bring them running? It's not as mysterious as it looks — believe it or not, a lot of what we get up to in the bedroom may well inadvertently send come-hither signals to dear pusscat. Here are a few examples of human/feline miscommunications.

If your kitty tends to snuggle up with you at night, a human in their bed means only one thing to them: snuggles! If you happen to be panting or rolling around athletically while you're there, that's just an annoyance to soldier through in order to reach the ultimate goal of snuggles. What makes perfect sense to a kitty brain results in you getting a faceful of wet nose and purring just as you're about to hit the ceiling. It doesn't help matters that many human sex positions yell "snuggles!" to felines who are especially touchy-feely. One of mine loves to curl up on people as soon as they lie down, so where we think we're positioning for sex and he thinks we're arranging ourselves as excellent catbeds. He has also adored snuggling into crotches since he was a chilly little kitten, which causes more problems with seated masturbation in bed than you can possibly imagine. But he's not doing any of this out of spite; he just can't quite figure out the difference between the times we coo "aww!" and the times we yell "get off me so I can get off!"

Then there's the problem of toys. Whether we're talking about rubber slappers, leather whips, or silicone dildos, it's entirely possible that your cat has "a thing" for them just as strongly as you do. Unfortunately, cats express their affection for materials through biting, scratching, and coating in cat hair, which is directly at odds with how you express your affection for such things. This one really isn't their fault, though: how exactly does a flogger look any different than a bird-on-a-string toy? If your kitty is one of the many who enjoy licking plastic bags, it's a good bet he or she will go gaga for latex or silicone, too, and that definitely won't end well. Even straight-up rope can grab kitty's attention, what with the way it looks like string and all. I suppose they call them "toys" for a reason...

Finally, of course, there's the bald fact that mayhem is a popular feline pastime. Cats don't have to be drawn to cuddles or toys to want to screw with your screwing. For a cat who likes to methodically bat progressively more expensive toiletries off the bathroom sink until he has your attention, there is no need for additional motivation to tackle you while you're fucking or play with your hair while you're giving head. Or maybe your pusscat likes to sit on the edge of the bed and sneeze repeatedly toward the main attraction. Maybe crazed running after invisible things in the living room and knocking things over is your feline's fancy. Sometimes, they don't need a reason. They just need to be cats.

So. What can be done to help keep your sex life moving despite kitty's best efforts?

The Shut-Out
We all know the #1 method of dealing with cats and sex: shut the cats out of the bedroom. We all probably also know the downsides — everything from caterwauling (no pun intended) to scratching, spraying, or chewing treasured items in retaliation. One of ours likes to lie down in the hallway, stick her arms under the bedroom door, and give her signature kitten-like valley-girl "mrrow?" over and over. Trust me, nothing destroys a leather-whips-and-chains scene like kitten mews and little pink paw pads! (Well, unless you're into that sort of thing...) On the other hand, if your kitty is pretty quiet, or you just need physical privacy and tend to crank up the music anyway, this is certainly the most surefire method.

Bribery
Tuna in the kitchen or catnip in the living room may well distract puss from wandering into the bedroom — for a while. That half-hour of catnip-inspired madness you were witness to last week? Only partially herb-induced. Your cat has more exhibitionist tendencies than you could possibly imagine. In my experience, catnip provided in an audience-less vacuum keeps a cat occupied for roughly 90 seconds, and if that's all you need to complete your bedroom scene, then I salute your mad efficiency. As for the tuna, it's worth wondering which is worse: a cat audience for the whole show, or a cat wandering in halfway through with tuna breath?

Timing
Those of us with more serious feline interference issues might actually attempt scheduling bedroom shenanigans around the cat's activities. If kitty is napping, it's possible kitty will continue to snooze through some bone-banging — but it's equally likely kitty will wake up needy and meowing desperately for human company. We have one that gets particularly clingy at unpredictable moments and will accept nothing but snuggles atop someone's shoulder to settle down. Another likes to carry "presents" of cat toys, socks, and other small items to nearby humans while engaging in an extremely loud and disturbing Siamese serenade. These are not easy things to schedule around.

A Workable Solution?
There's only one thing left, then: acceptance. Believe it or not, sometimes simply acting like a cat's presence is no big deal can be the perfect answer, especially if you and your partner(s) have a sense of humor about it. I've been in the midst of partial sensory-deprivation scenes only to feel a cat climb up on my chest, or I've looked up from giving head to find a partner laughing because a cat has nestled into his armpit. The amazing thing is this: the scenes weren't ruined. For the most part, the cats settled down and stayed more or less out of the way.

Co-existing with cats can be a miserable thing without a sense of humor — ditto for having a sex life! There will always be scenes or sexual situations where you want full control over your surroundings, but often it's not as necessary in day-to-day shenanigans as we think. I will refrain from the obligatory "pussy" double entendre and simply say that it's very possible to keep peace in your house — for humans and felines alike — without getting the least bit catty.
Tags:
Views: 1688
Related articles