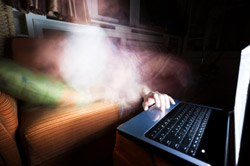 Gamers and sex. I know these two words aren’t often paired in popular lexicon. Nonetheless, I feel it is my duty to inform you that gamers are having sex, lots of sex. While there are many things to be learned from the Gamer Sutra, today I’d like to focus on cybersex.

Introduction and Some Incoherent Babbling

Gamers didn’t invent this Internet phenomenon, but they have embraced it with open arms. An informal survey of the women with whom I play a popular MMORPG (Massively Multiplayer Online Role-Playing Game to the uninitiated) revealed that nearly 75 percent of them had engaged in cybersex within the game.

As part of my very technical research, I pressed these women for more information about their online sexual encounters. Their experiences ran the gamut from, “It was strangely more intimate than some real life sex I’ve had,” to, “It was the most awkward thing I’ve ever done.” As I gathered more information, it became apparent to me that cybersex encounters were as varied as sex in the real world.

As part of the minority in my online social group, I’d never really considered the topic. Oh, I knew it was out there, but for me it was kind of like hiking—you know, one of those things you do outside, where they haven’t installed air conditioning yet. People do it. It even looks enjoyable, but it’s just not something that gets my rocks off. Despite my disinclination, I decided to pop my cyber cherry in the name of journalism. That’s right, I’m doing it for you guys.

So it turns out that one does not just declare that they will have cybersex, and then, poof, cybersex appears. This meant that I needed a game plan. First I needed to figure out, what is cybersex? According to dictionary.com cybersex is “any sexual activity, display, or discussion engaged in by means of a computer.” On the surface that seemed great, but the definition was rather broad. Right now I am engaging in a sexual discussion with you by means of computer. Does that mean I’ve already popped the cyber cherry? Not wanting to lose myself in that meta discussion, I needed a better definition. Thus, I turned back to my gaggle of geeky gamer girls and received this gem: “Cybersex is writing a collaborative erotic story.” I liked that one so I kept it and added “online” to the end, just to reinforce the cyber bit.

Once I had a definition, I found myself contemplating why this sexual medium had gained so much traction with my friends. It dawned on me that I’ve been gaming with the same group of people for a little over three years. I know these gamers better than I know most of my neighbors. This close contact with people who already share like interests inevitably leads to sparks of affection. Hell, even I have taken a lover from this pool of people. I was fortunate to be geographically near the young man who struck my fancy, but our social network extends as far away as Australia. It occurred to me that when these feelings blossom between people who are not a short drive away, it makes sense that people would explore this sexual attraction in a virtual environment.

Next, I did what I always do when tackling a new project. I asked the experts. Once again my gamer gaggle was indispensable. One particularly useful pearl of wisdom was, "Don't over think it. At the end of the day it's just sex. If you relax and just do what comes natural I promise you'll both have fun." The other invaluable tip was a link to Billy Shakespeare’s The Complete Idiot’s Guide To Having Cybersex With Other Complete Idiots. It’s a tongue-in-cheek primer that provides valuable insights on les liaisons d’amour d’online.

First Thrust: Cybersexing Someone You Know

About Him: My current sex partner, the one I’ve maintained the longest continuous relationship with (almost exactly seven years), is a programmer by day and a renaissance gamer by night.

Getting started: Even though we were in different rooms, we were both in the same house. It took a little while to settle down and after a couple rounds of “Do you want to start now?” “Sure, go ahead.” “I don’t know what to say; you start.” I wasn’t even sure we’d be able to do it. However, he eventually got around to the classic opening gambit: “So, what are you wearing?” “Silly, you know what I’m wearing; you just saw me.” “Well yeah, but pretend I don’t.” I’m not sure what it was, but something about that line made it click for me. This was pretend—we were going to pretend together.

The Good: Despite a very long and intimate relationship with my partner, I think we both learned a little about each what makes the other tick sexually. Verbalizing our lovemaking forced us both to consider each action that we took, and what aspects of intercourse we focused on. We also gave more specific feedback. In real life, a happy moan can be a response to any number of simultaneous stimuli. Did he moan because I put my hand on his back? Was it my breath against his neck? Perhaps it was both?

The Bad: For me, sex is a very natural thing. I’m not saying I’m an expert, but after 10 years, I’ve developed a well-versed playbook. Unfortunately, what the body does naturally doesn’t translate easily to the written word, and I found I had a serious case of the centipede’s dilemma.

The Ugly: It didn’t get either of us off.

The Great: It did get us both riled up and led to a mind-blowing, real life encounter—easily top-five material.

Second Thrust: Cybersexing Someone Else

About Him: He’s my high school crush. Thanks to the wonders of social networking, we recently reconnected, even though he now lives abroad. It didn’t take long for us to realize the sparks never died, despite them being a decade old and highly impractical.

The Good: After decade-long teenage crush, this was a golden opportunity to indulge in a bit of wish fulfillment. He’s an artist at heart, and this made him a much more creative partner. Once we were able to get past awkward feelings, the experience was much more fulfilling and smooth.

Gamers are not the only people who find themselves geographically removed from a lover or potential lover and in need of sexual release. Even for those who are lucky enough to be physically close to their partner, the opportunity to examine your sexuality in new light can lead to exciting insights into said sexuality. Even more exciting, a sexy literary exchange while you are apart, can lead to a very heated evening when you return home.

I found cybersex to be like a favorite appetizer: It’s sensual and delicious, but in the end, it just left me wanting more. After a little practice and research the centipede’s dilemma abated, and I found the practice liberating. I also found that, just like in real life, my experience varied significantly between my two partners. All in all, this is an exercise in stretching my sexual boundaries that I intend to repeat, albeit, perhaps with a more natural foreplay than: “Hey, Babe, it’s time to drop our drawers and cyber for journalism!”
Tags:
Views: 1195
Related articles

GeekyLove
As a life-long nerd, I find myself a frequent denizen of the internet. As a web designer, I create and manage it's content. As gamer, I enjoy it's social and entertaining aspects. As a sexual creature, I've purused the sexual and pornographic elements of the internet. And now as a member of Sex Is I find myself fairly exploring my own sexuality in a fairly public, if thankfully anonymous forum.