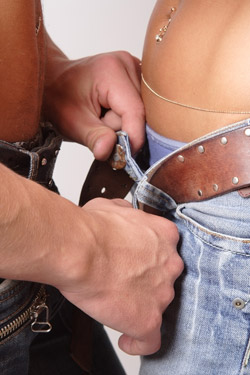 The Internet has done what all great tools of communication do: fundamentally transformed the way we interact with one another—and that’s just as true of our discussion about sex as it is anything else. The games we play haven’t changed, but how we play them has.

The Evolution of Intimacy

From Facebook to sex blogs, from Grindr to “sexting,” the private has become the public. Love letters have been replaced by e-mails and text messages, diaries have become public blogs, and teens and young adults have moved, “I’ll show you mine if you’ll show me yours” onto their cell phones.

Every couple has to negotiate the specifics of privacy; what exactly is on- or off-limits when it comes to discussing their relationship and sex life. This isn’t a new phenomenon, but it certainly is a more complicated one now that Facebook and Twitter have made every little tidbit that you share indexable and searchable. Depending on how closely you monitor your privacy settings, your declarations could be open to your high school sweetheart, your boss … or your grandmother. (Warning: Facebook’s default privacy setting is “Privacy? What privacy?”)

Colin and Oisín are two young, attractive Irishmen who met in 2008 after a nude illustration of Oisin was published in Butt magazine. Upon learning that they were both in Ireland, Colin wrote Oisin a letter, and the two met shortly thereafter in Paris.

Early on in their relationship, they began documenting their lives with photography and posted the photographs online. “The photographs were us being proud of knowing one another,” says Colin. “We lived so far apart, that having this link was great when we couldn’t see each other or even talk on the phone.

“In the beginning, the images were shared publicly, but they were different then. We used to post a lot more full-on nudity, erections and generally loads of adult stuff.” The photographs grew into a project known as Quinnford + Scout. In the nearly two years that the project has run, they’ve created a photo diary that comes closer to capturing the real magic in a relationship than anything I’ve ever seen.

Their photographs run the gamut from the mundane (breakfast: toast and orange juice) to the sexual (post-coital smiles with bodily fluids.) Through Flickr, Tumblr, and finally their own website, they’ve laid out an exquisite portrait of love, sex and life. Their body of work is a documentary, a blog, an art project, and a love letter facilitated by the Internet.

“[The] photos were personal documentaries for each of us to look at and remember time together—sleazy, domestic mementos at times,” says Oisin. “By the time we knew we would eventually be living with each other, the photos had already become a project we looked forward to adding to, like any college brief we were doing at the time, only more fun. Now, it stands as a diary and a project that keeps us going. We love adding to it and finding new ways of capturing the other side of each other.”

Quinnford + Scout has transcended the boundaries of its digital birthplace. The photographs have recently started appearing in art galleries. “Initially the photos were very graphic, very adult, but that’s what we did when we met up, and little more,” Oisin explains. “So now we negotiate things like photo quality, suitability and relevance. We’ll negotiate through it all—from Tumblr answers to uploads of each other’s faces or bodies and we do both hold what we call a ‘personal veto.’ It keeps things calm in the sitting room.”

Colin and Oisin aren’t the only ones using the internet to build something new. Artists of all stripes are taking advantage of the World Wide Web to reach whole new audiences, and the net’s endless capacity for cheap media allows stories and art to grow naturally and allows people to share their stories directly and honestly. 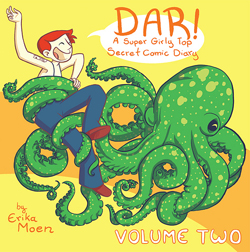 Erika Moen is a cartoonist who, until recently, posted a comic online called DAR: A Super Girly Top Secret Comic Diary. Her comic, since collected into two print volumes, charts her personal history as she finds herself falling in love with Matt, the man she eventually married.

Sure, it sounds like a typical girl-meets-boy story, but when you toss in the fact that Moen is queer, and pretty much solely identified as a lesbian prior to meeting Matt, you get a frank and honest story about love and sexuality and identity politics.

Moen posted her comic online one page at a time, short diary comics that covered everything from painful buttsex to how much she loves her boobs. She writes comics about sex toys, sexual identity, and queefs. Like Quinnford+Scout, DAR’s strength is in the minutia, and it’s the details that make her work so easy to relate with.

The downside of this is that Moen’s husband has to deal with people coming up to him at comic conventions to say that they’ve read comics about his penis. (This, too, made it into a comic of Moen’s.) I can only hope that Matt recognizes that his discomfort is a small price to pay for a comic that can and has helped so many people.

John Stark is a writer who started blogging about the open relationship he shares with his wife, Jenny. Recently, Stark took a collection of his writings and turned them into a book called Small Things.

After finding publishers weren’t interested in a book without a conflict, Stark took it upon himself to record and release the work as an audio book, and what he’s created is a charming and funny collection of short stories about a young couple who decide that monogamy isn’t for them, and—wait for it—everything works out.

Each of these stories grew slowly and publicly. Whether it was one photo at a time, or comic strip or blog post, these projects shine because the devil is in the details, and in these cases the devil is honest, sexy, and not all that devilish. The devil is, in fact, quite human. It’s stories like this that bring people comfort and security and help move our sexual discussion forward.

While it’s important to discuss sex openly, it’s nearly impossible to talk about without getting a little personal. The problem with keeping everything in the bedroom is that it makes it easy for the moralists and the righteous to minimize our shared experiences. When we stand up and collectively say: “We all do this,” we take away the power of others to say that we don’t.

Everyone needs to decide their own level of comfort, though, to find their own level of honesty. Those of us in partnered arrangements have to additionally take our partner’s feelings into consideration. After all, there are some wonderful things I do with my partner that I’d love to tell you about, but it won’t do me any good if he’s upset by my candor and decides we’re not going to do them again for awhile.

Still, if you buy me a drink or two sometime, I’m more likely to be honest. If you buy him a couple, he’ll be more likely to forgive me.
Tags:
Views: 1225
Related articles