Sex and the Newly Single Mother 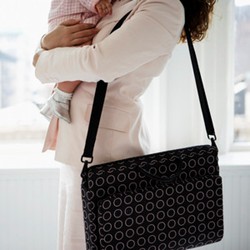 I’m a newly single mother with a ridiculous libido, a penchant for deep throating and the ability to grind a man into orgasmic hyperventilation. (Not to toot my own horn, but a girl must be confident in her talents even though I’m too chicken shit to try them out on anyone new.) I’ve left my comfort zone sexually, the place in which I was pretty happy and complacent: marriage.

There we were, breathing heavily in one another’s ear. The phone conversation had turned way more heated than at least I had intended, but I was excited for what was to come next, tilting my hips for easier access.

“And you know what would be hot?” he asked.

“If you dressed up like a school girl, in the cute little plaid skirts with pig tails and everything,” he said.

“Uh,” I asked, my mood suddenly shifting, “why would that be hot?”

“Because, you’d be all innocent but sexy, and you could call me Daddy or Mr. Carsons… Pretend I was your teacher or something, and you needed to be punished,” he said.

“Yeah… um…no,” I said. “Gee, my youngest daughter just woke up and here she is, so I gotta go.” I hung up quickly, before he could really protest.

It was a lie, of course. My daughter was still fast asleep, but he had completely turned me off. Before I became a mother, I’m sure I would have gladly obliged him, but now that I was the mom of two young girls, the idea of dressing up like one of them creeped me completely out. I’m supposed to be turned on that you want me to pretend you’re a male authority figure taking advantage of a young and innocent girl? Sorry man, no way.

I do understand the intricacies of fantasy, and I know that my phone lover was most likely a completely average man; one who had discovered his fetish in the grand Britney Spears debut era, and would be no threat to an actual schoolgirl—but regardless of all that—my inhibitions won’t allow me to pursue any sort of relationship with someone with those interests. Anything like that makes me extremely nervous.

Since I’m in such a drastically different place than I was before I got married and had kids, I’m trying to reevaluate my sexual priorities right now. Back then, I worked in a couple of different areas of adult entertainment. I wasn’t overtly sexual in my day-to-day life, and didn’t have men galore at my beck and call outside of working hours, but my mind was opened up and blown away by what I learned and experienced in those jobs. I really had no qualms about sexual fetishes and preferences. There were things I wouldn’t do, or didn’t understand, but there was nothing between two consenting adults that would have really gotten to me. Now that I’m a mother, my views on sex have changed.

Things that I might have been all right with before now make me nervous in ways that never mattered. Before I had my girls, I would have been happy to dress up in the plaid miniskirt and pigtails, pucker out my bottom lip and whine (hell, I actually did just that for work a few times and I made excellent money on those nights). I’ve had a couple of previous lovers who had a fondness for being called “Daddy” or referring to themselves as “Daddy” during sex. It never bothered me, and I was actually happy to do it, usually taking the Daddy moniker out of the bedroom and turning it into an all-the-time pet name.

I think that if someone I was serious about asked me to dress up like a child or call them Daddy, I’d end up reevaluating our relationship. I’ve heard too many horror stories about single mothers and their children becoming unsuspecting victims of seemingly normal men, so in my mind, red flags are everywhere when I’m dating.

A few months ago, I was talking about sex with this amazingly attractive guy I’d just met, and he said something about him wanting to fuck me bent over my kitchen counter. I told him that wouldn’t work out too well because my daughters were light sleepers and might walk in on us. His response was, “Well getting caught is sort of the point of taking it out of the bedroom, right?”

I was not impressed. I tried not to think too much about, but in my head I kept replaying it: He wants to get caught fucking by my kids? It was a total deal breaker.

And speaking of deals gone south, I met my now ex-husband at my last place of employment in the adult arena. I was working at what we call a jack shack, a one-on-one strip club where after the private dance, the customer gets a hand-job, too. I’m pretty sure that when I left that life behind and married my ex, he expected some really freaky, delicious, naughty sex.

He was disappointed. I was a prude.

Now, thanks to him, I’m a newly single woman with a ridiculous libido, a penchant for deep throating and the ability to grind a man into orgasmic hyperventilation. (Not to toot my own horn, but a girl must be confident in her talents even though I’m too chicken shit to try them out on anyone new.) I’ve left my comfort zone sexually, the place in which I was pretty happy and complacent: marriage.

Getting divorced and attempting to start my sex life all over again is difficult for me. I’m used to one man—the way he does it, likes it, what he’s into and isn’t and what he expects and appreciates now and then. Now, I have to learn all the little sexual nuances of different men in order to ensure that our experience is equally pleasurable, and that’s not easy. Sex is a million times better to me when I know that I’m rocking my partner’s world, so getting off and leaving him hanging wouldn’t leave me satisfied. Having to be reminded that sex is so varied and unpredictable from person to person is frustrating, and makes me feel it’s more trouble than it’s worth at times. I can, after all, do it better myself.

Raising my daughters almost completely on my own due to their father’s work schedule and distance means no clubbing or bar hopping or man scouting. It means being less likely to be approached by anyone because I’m holding one or two tiny hands, which makes me seem either like a lot of work, or taken. It means feeling like no man in the entire world would want me when he could have her—you know, the other 24-year-old with no kids, no perpetually existent ex, no stretch marks or cesarean section scar and a tight body. Getting naked in front of or around a new person makes my ears hot and stomach turn.

My ego has been deflated. My body has only been seen by one person in six years—my ex-husband—and since he watched its gradual progression into what it’s become after I carried and bore his children, I had no qualms about exposing it to him. I had more physical sex appeal prior to marriage, even though I didn’t have anything to back it up with. Now, I know I’m a damn good lay, but this body of mine, with its stretch marks and cellulite and extra pounds and less elasticity; it’s not really conducive to me showing off my skills.

I should be able to get over it or around it somehow but for whatever reason, I just can’t. I have it in my head that any man who was to see or touch me would lose his boner instantly. Sometimes I think that the only way for me to get past this fear would be to jump headfirst into fucking again: Opt for one-nighters over dating and relationships because for some reason it’s much easier for me be free and spontaneous sexually with a stranger. I was never one for hooking up with random lovers, no matter how much I might have I wanted to. I couldn’t and I still can’t.

So, what to do? Do I force myself onto a random hot guy in the back of a club; do I continue to wait for the right guy with no sexual red flags to come along? Do I learn to separate myself as a mother completely from myself as an intensely sexual being? I’m not exactly sure yet, but I’m working on it, and God knows I need to figure it all out soon, because the speed with which I’m running through batteries right now is not really good for my single mother of two budget.
Tags:
Views: 1708