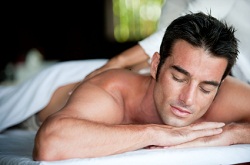 In every city, hundreds of beautiful men and women are including sexual activity into their massage practice. Alternatively, could it be that they are involving massage in their sex work? Nudity, mutual touch and sexual stimulation are becoming common complementary features to therapeutic touch…. There’s always been a thin line between massage parlors and cathouses—if any distinction at all.


His eyes alternate between my résumé and my person, either one or both makes him frown. “So you got your license this summer?”

“Yes sir.” I regret not wearing my contacts.

“Which modalities are you trained in?”

“Shiatsu, acupressure, muscle energy technique.” My enthusiasm fades as I realize he isn’t impressed. The manager’s been avoiding eye contact the entire interview. Kicking myself for not working more on my skinny forearms, I continue to ramble, “I have a really great vibration technique; I’d be glad to demonstrate if…”

“That won’t be necessary,” he interjected quickly. “You’re relatively new to this field and, unfortunately, we’re looking for therapists with a bit more experience.”

At least, he tried to say it as nicely as possible. After a moment of awkward silence, I extended my arm for a handshake, “Thank you for your time.” Taking my walk of shame out into the lobby, I passed another gentleman waiting. He was beautiful. Very clean cut. Golden blond hair, neatly trimmed. His nice, muscular build beat my lanky frame any day of the week. Leaving the spa, a bad feeling developed in the pit of my stomach.

In every city, hundreds of beautiful men and women are including sexual activity into their massage practice. Alternatively, could it be that they are involving massage in their sex work? Nudity, mutual touch and sexual stimulation are becoming common complementary features to therapeutic touch. Has it always been this way? Getting right down to it, there’s always been a thin line between massage parlors and cathouses—if any distinction at all.

Perhaps it’s due to the intimate nature of giving and receiving massages. Maybe economic pressures influence therapists to amend their services to involve sex. As we begin to take on a more Eastern philosophy, could we be harnessing the healing properties of eroticism? From my findings, the motivations and reasoning differ from practitioner to practitioner.

Regardless of what those low-budget, collegiate commercials say, my classmates and I didn’t register for a “hot, new career.” Instead, we were actually passionate about helping people. Learning how to help manage pain, illnesses and imbalances, I grew more and more excited to unleash my newfound knowledge. The idea that my touch could be medicinal excited me greatly.

Little did we know upon graduating from massage therapy school, we should have had the words: “Don’t quit your day job,” emblazoned on the diploma. A very small minority of us were actually successful making a decent living doing bodywork. Most of us became “independent contractors,” working occasionally, at best. Meanwhile, the interest on my student loans was piling up.

With the little time I had available outside of my full-time employment, I found myself trying to develop a private clientele that worked with my schedule. Posting ads on Craig’s List, in the local newspapers and other massage publications, I was shocked by the response. Flipping my certificate over, I expected to find in fine print: “WARNING: Massage therapy may be perceived as synonymous with sex work.” The surgeon general wasn’t so kind.

By merely listing the styles of massage I incorporate and my hours of availability, requests for pictures, measurements and late-late-night appointments quickly littered my inbox. Race? Cock size? Happy ending? Oral? Top or bottom?

His e-mail message read, “Hello, I saw your ad, and I’ll be interested in receiving regular massages if you’re in my price range. I’m 58 years old, and on a fixed income, my funds are limited. I cycle to stay fit, so I need lots of work on my hamstrings, quads, glutes and calves. Are you available Tuesday evenings?”

After sending him my questionnaire, an inquiry regarding his health and expectations, I was excited. This could be my first real client. I’d had my fill of guys whipping their cocks out near the beginning of the massage. I was getting tired of men tugging at the drawstring of my scrubs. After talking to Dave, I could see that he was truly interested in a sports massage to save his legs.

I was relieved upon meeting him, too. He was an older, white male with gray hair and glasses. Sitting to remove his shoes, he said, “I can only afford an hour, so I’d rather you focus mainly on my hamstrings and quads.”

We began the session with stretches. With Dave lying on his stomach, I pressed his heels toward his backside to alleviate the tension in his quadriceps. Relaxing, he started to talk: “Today, I was climbing the stairs and my knee locked up.” Rotating my palms from his hamstrings to his inner than outer thighs, he let out a grunt. “That smarts! I’m overdue; I shouldn’t have waited so long.”

His legs were stiff as boards, so I had to take my time with each muscle. For his glutes, I started to knead with my elbow. Crossing his leg over gave me better access to big knot he had developed. Dave made a sound, hissing as if he were in pain. “Did you want to take a break, sir?” I asked out of concern.

“No, I’m fine—it’s just…” Another sharp inhale broke his train of thought. “It’s been a while!” Suddenly his hips started to thrust and his entire body stiffened. Then he groaned loudly, and rapidly began to apologize: “I’m sorry, sorry…I’m so sorry!”

“More than putting someone’s shoulder back in, they’re looking for an intimate need being met,” explains Max, a therapist who claims to use libido and erotic energy to heal. Discussing the differences between clinical and Tantric modalities, he observes: “They’re looking for some kind of fulfillment that is not just about getting a good foot rub.” In his twenty years of experience, he sees a very evident distinction between mechanical sex acts and achieving healing intimate connections, “If you are new to the industry and you’re pretty much giving happy endings because you think it’s expected or for more business, ultimately, you won’t have a very satisfying practice.”

Forbidden Light
Pervert. Heretic. Avant-Gardian. New blogger, Forbidden Light, makes it his mission to mix all things with sex and fetish. With the belief that "sex is a microcosm of the universe"; he tests his theories by making strange sexual juxtapositions. In his blog, Journals of an Intelsexual, he severely over-analyzes the basic and attempts to summarize the grandiose. Kink. Spirit. Headaches. Is there any more to life?

Other articles by Forbidden Light