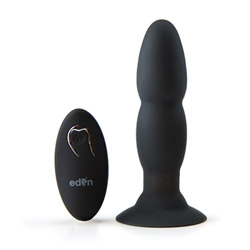 These pearls are a girls new best friend 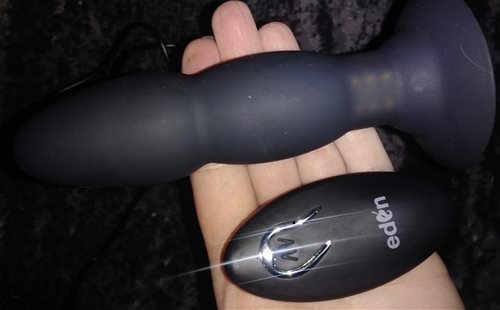 The only directions were printed on the back of the box and did not give much towards instructions. I figured like most rechargeable toys it probably needed to charge before our first test run so I went work trying to get the toy plugged in. The first thing I noticed was the nice smooth texture but I could feel little beads or balls (the pearls I am assuming) under the surface. I was intrigued! The smooth texture is nice, but I found that it was difficult to find the power button and even harder to see the small pin hole for the charging port. I finally found them on the top bulged of plug, a very odd place indeed. My first thought at discovering the location was I sure hope those seal up tight when being used, I'd hate to have the charging port malfunction from use or the power button to be turned off during play. hmmmm.

The power button lights up red when it is on. Once turned on if it is not being used withing 10 minutes it shuts itself off to conserve power.
The remote is small and fits comfortably in your hand. I gave it a quick test to make sure all batteries were good and all components worked before plugging it in. They do! 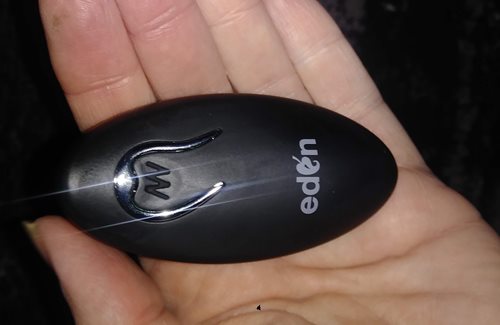 Once we were done charging I took the opportunity while the hubby was in another room to turn it on and insert it and slide him the remote. I was very disappointed because all that happened was it kept turning off. After some investigation we discovered 1. The remote and plug don't operate that far apart even though he was 1 room over. 2. He was holding the button too long when trying to change it and I wouldn't hold it long enough. 3. It worked best when aimed just right directly at my crotch, and the closer the proximity the better. So a little disappointed with the remote but the plug itself was my oh my! Such strong vibrations I thought I was going to instantly orgasm as soon as it turned on.

You definitely need to use lube when using this toy simply because it slides in better. I learned I needed to relax that we were either accidentally turning it off with the remote or ran out of battery, I was NOT actually hitting the power button with any muscles or anything while using the device. Not even with a second toy in my vagina at the time. I know crazy thought right! I have no idea what muscles I thought would be strong enough in my rump to push and hold the power button for like 10 seconds to shut it down, in the right spot no less. LOL! Once I stopped worrying about that crazy notion, I could actually enjoy the ride, and I did enjoy it! A few times!!

This plug is similar to the Eden vibrating silicone anal plug (that I already own) as far as material and sizing goes. The material is a soft smooth silicone which I personally think makes for the nicest toys because it is soft with a little give to it but not too much give and is very easy to clean. I would still recommend using a water based lube when inserting simply because it helps the toy go in that much easier. It also has a nice feel when being used that allows you to focus on the fun. There are rotating beads (the pearls) are underneath the silicone which you can feel if you give just a little squeeze to the toy while holding it. Once those babies are turned on though, it is pure enjoyment as they rotate under the silicone providing tons of pleasure.

The design of the toy itself is a great shape and size for the average level users. It provides stimulation in all the right places and stays in place fairly well so no worrying about it falling out. The size and bulges are just right to make you feel full and enjoy your playtime without being too much. The remote itself is nice and small and discreet and easily lost in the bed if you're not careful, yep, did that more than once. So I suggest when you find the setting you want to leave it at for a while place the remote on a table or night stand near by for safe keeping.

It is a bit loud even when inside so it is not something you would want to wear out to say a movie or quiet restaurant. It's not too loud as to be heard through a closed door, but if someone were to barge in (ie. kids) they would definitely be able to hear the buzzing. It does take a few seconds holding the button down on the remote to get it turned off, which can seem like forever when people are intruding or interrupting playtime. Really it's only about 5 seconds at the most before it shuts down.

The toy itself is not going to be easily hidden away very quickly as it can be a bit large depending on where you keep your toys and may need some shifting in the toy box to get it hidden away. Not that it won't fit, just that it will take more than a quick second, so hopefully turning it off is all you'll really need to hide your toy in the moment.

This toy functions really well when it is on and you are enjoying the rotating beads/pearls under it's silicone outer shell. That is absolutely the best feature and of course the most important feature of the whole toy. The small remote is nice and easily hidden in a hand or pocket, or lost in the bed sheets. The toy is also a bit on the loud side, even when inserted during use. It seemed louder to me than it actually was while using it. I was just sure they could hear it across the house it seemed so loud to me. However, my hubby assured me that it wasn't that loud but it was loud enough that if I was using it and someone was in close proximity (same room or door way to room), they could hear a slight humming sound.

With the good, especially something that feels this good, there has to be a few downsides to it. Right? This one actually has 2 not so great features in my opinion. First, the placement of the charging port, remote for sensor, and the power button on the toy itself is in a very odd spot. It is on the top bulge of the toy. I found that I was so worried about the power button and the seal of the charging port the first few times I tried out the toy that I wasn't able to relax and enjoy the moment. I also discovered that the remote has to basically be in my crotch and pointed directly at my crotch to change the settings on the toy during use. This was a little disappointing because it limited the distance and settings we could use it in.

The second, is the base is supposed to be a suction cup base that would allow it to stick to a smooth surface. I personally didn't find that it stuck to well, especially when trying to use it, but I did find the flat base was useful in holding the toy in place while my hips were moving around, changing positions, or whenever I felt necessary for my own sanity. Yes, I'm a worrier, but there is nothing worse than a toy slipping out a the wrong time so I or my hubby would hold it in place so I wouldn't have any distractions and could focus on the fun.

This toy is exceptionally easy to care for. I simply wipe the toy off with a baby wipe when needed, such as if I am not going to clean it for a minute or 2 or as needed for sanitary reasons. Then I use my bottle of Eden Fantasy toy cleaner.

Spray it on and let it sit for 3 to 4 minutes to do it's magically disinfecting of the toy. I then take another baby wipe and wipe it down before putting it away. This step isn't necessary, but I feel like it makes sure that everything is off of it and it is really clean. It also gives it more of a dried feeling to me so I am not putting away a wet toy, which I can't stand to do.

**Do not place this toy in the dishwasher for cleaning as I am not sure the electrical components inside would hold up to the high heat of the dishwasher.

The toy came packaged in a small box with a picture of the toy the front and a set of directions on the back. The package was small and would be identifiable as to what is inside the box, if it hadn't been shipped to me inside a larger plain brown box with the rest of my order. Inside the remote, charging cable, and toy where secured in their respected places on a piece of formed hard thin plastic. Just strong enough to hold it's shape and keep the parts in place during shipping, but thin enough to be crumpled down and tossed out easily. I recycled the box into our fire pit as a starter and the plastic I tossed out.

This toy is very enjoyable and has a lot of power. Having tried both this one and the very similar Eden Vibrating Silicone Anal Plug, I can tell you that I prefer this one any day even with it's dumb charging and power button locations. It has more power, better feel, and no annoying wire to deal with. I wish the charging port and power buttons were located elsewhere or the toy and that the remote was stronger and worked better while the toy was in use, but none the less, I enjoyed it. I usually just turn it on to the setting I want before inserting it and just leave it there until I am done using it. I found it was easier than getting the remote turned at the exact right direction or holding the button just long enough to change it without shutting it down accidentally. My hubby had that problem in the beginning. He held it down too long and shut it off all the time. Then I had to remove the toy, turn it back on that way and start over. So avoid the frustration, pick a good setting you'll enjoy and insert the toy while it's running and go for it.
I like that it is rechargeable, but I don't think the charge lasts more than a couple hours even when not in use. I haven't fully checked this out, but I found that upon charging it and putting it away it didn't have much if any power left when I got it back out a week later. I would recommend charging your toy a few hours before you plan to use the toy. I know that is not always possible, but when it is it will help the toy work best.