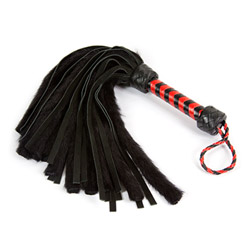 A Softer Touch with a Bit of Bite

Designed for those who want to dabble in floggers without the large dungeon or bedroom space to do so, the Faux Fur Flogger is an affordable option for those who want to try some impact play. With the short length that works well for bedroom use partnered with the soft, faux fur tails that can't cause injury, this provides a softer alternative to a standard dungeon flogger.
Pros:
Very beginner-friendly. Great length for bedroom use. Well-constructed. Affordable.
Cons:
Tails don't move as "one". Handle may be too slim for larger, masculine hands.
Rating by reviewer:
5
extremely useful review

At 18" in length with soft tails, this flogger was definitely designed with a bedroom user in mind. Easier to control in smaller spaces because of its size, this flogger will provide a gentle warm-up sensation for hardcore players while adding a nice way to enjoy a flogger without too much pain for softer players.

The smaller size may also make it easier to carry around for travel use. However, as with any flogger, make sure to store it relatively flat and remove it from your storage bag as soon as possible to prevent wrinkling to the flogger strands.

All of the parts feel well put-together. The tails are attached firmly, and while the faux fur isn't the softest fur out there, it is soft enough to feel gentle on the skin. The suede also is soft to the touch. The braiding on the handles is well-done without any holes, and the hanging loop seems firmly attached.

The flogger is pretty light and easy to maneuver. It doesn't feel like it has any extra weighting to it.

As a note, as you first begin to use this toy, prepare for the leather to "shed". You're going to get bits and pieces of leather hanging around. This is part of the leather process, and it'll slowly stop as you continue to use the toy. Despite being made of leather, however, it doesn't have a very strong "leather" smell like some kinksters enjoy. It has virtually no scent to it at all.

It's really a good thing that this flogger was designed as a soft and friendly flogger or the performance might be an issue. As it is, the faux fur partnered with the short stature makes it difficult to hit a "distinct" spot perfectly without some tails flying off to hit a different spot. Since the tails are suede and faux fur and are pretty soft, this is not an issue. It just feels pleasurable in a large, broad area instead of the standard smaller, confined areas that most floggers provide.

As for the sensation it leaves, this flogger was really designed for those that want a softer touch. It can leave a very, very light sense of sting, but for the most part, it's really designed as a lighter option. It doesn't have the "heavy massage" sensation that some leather and suede floggers do, but it has a lighter touch to it. It might have a bit of a sting if the handler is trying to hit with just the tips of the strands, but with broad strokes, it's going to feel quite nice and friendly. Not quite thuddy but definitely not stingy. You would have to try very, very, VERY hard in order to bruise with this flogger.

From the top's point-of-view, it's a pretty easy flogger to handle. As expected, it doesn't have any sort of balancing built into the handle, but with the suede and faux fur for tails, this is not an issue. The handle, in order to save room on the size of the flogger, is much smaller than expected. For my female hand, the top and bottom of my hand both touch the ends of the handles. An above-average male hand (mine is above-average for female) might have an issue being able to comfortably grip the handle. Once gripped, however, the handle is very easy to keep hold of - even with lubricated or sweaty hands.

Made entirely from porous material, consider this fluid-bonded to a single partner if it gets near bodily fluids (and realistically, it will if you're using this while naked). Make sure to practice safe toy use - even for floggers and BDSM implements. For regular cleaning, avoid using too harsh of soap on the tails. A very light water will work on the faux fur while the leather/suede portions should never be exposed to any harsh soaps to expand their lifespan. Your best bet is to keep your toy pretty clean from the get-go, but anti-bacterial wipes can help keep the toy a bit safer to use.

As with most floggers, please take decent care of your toy to keep it looking good for a long time to come. This flogger comes with a long loop at the end of the handle. Aside from using it around your wrist, this loop allows you to hang this flogger from any hooks. Hanging your flogger allows the strands of the tail to stay unsquished and increases the longevity of your flogger.

However, if that's not possible, try to store the flogger in a way that doesn't have anything pressing or distorting the long length of the strands. Long-term storage with the tails crunched into a ball may cause permanent wrinkling and affect the performance of your toy.

Packaging was very minimal. The flogger comes in a single-layer, see-through plastic bag that keeps all of the tails and strands together during shipping. The flogger slips right out of the bag, and it has no tag or further identification on it.
This product was provided free of charge to the reviewer. This review is in compliance with the FTC guidelines.