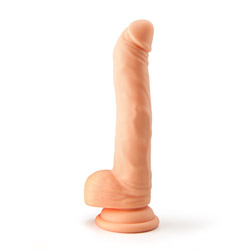 All the right spots

This silicone Sensualist truly knows how to press all the right buttons, if you press his. He's a 9 inch, rechargeable, waterproof, rotating vibe and sure to keep the good vibes going no matter where you decide to play. From an enjoyable time with your partner, solo or even some wet and wild play there's plenty of possibilities with this beauty.
Pros
Silicone
Suction cup
Beginner Friendly Size
Strong Vibrations/Rotations
Cons
Fairly Firm
May be to strong of vibes for some
Rating by reviewer:
5
extremely useful review 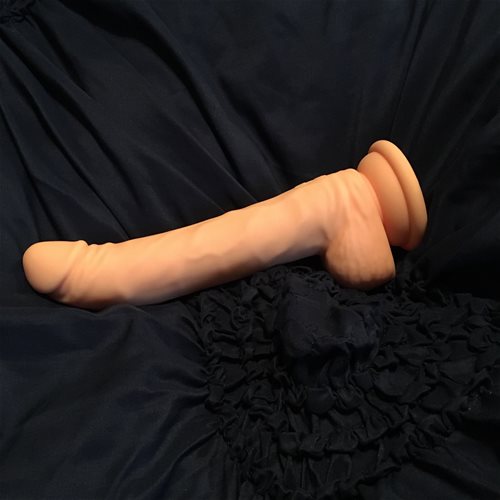 This toy is made of silky smooth body-safe silicone; this is honestly my favorite material for toys. The smooth nature of the toy works very well with water-based lube; this makes it very slick and easy to use. It certainly adds to the realistic qualities of the toy. The shaft has a raised web of veins and some wrinkles behind the head of the toy that are fairly well done to a realistic aspect. There is a faint, almost unnoticeable seam running throughout the toy; it isn't anywhere near as raised as the veins but can be felt with fingers if you're really looking for it. The Sensualist is fairly firm due to the motor taking up most of the shaft. The only squishy part of this toy is the first inch of, which is mostly the head, the balls, and suction cup. Otherwise, this is a very firm toy and has very minimal flexibility. 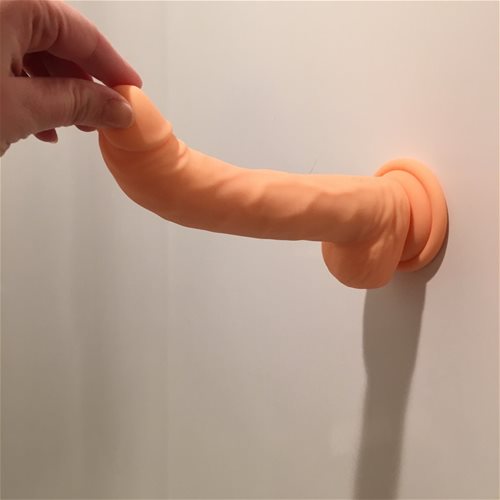 Trying to bend the toy has next to no result with how firm it is.

There is a slight smell to the toy right out of the packaging, but this is to be expected. Once it has a chance to air out and have a good washing the slight smell will quickly fade. No notable taste is found, and it feels very smooth and fleshy in my hands, among other places. This toy does get a little static charge to it and tends to attract dust and small hairs.

The design and shape are easy to hit all the right spots with, especially when turned on. The array of wrinkles and veins provide a very realistic touch. The head isn't overly protruding and provides a very easy and slick transition to the shaft of the toy. This can be a plus to some and a minus to others, I personally prefer there to be a little bit more of a dip behind the head so you can really feel the transition, but with the rotating shaft, I think it was for the better to make it how they did.

Size is very workable, in my opinion for anyone who's experienced penetration before. With 9 inches total and 7 inches insertable; some may find his length a little too long. Roughly 1.5 inches in diameter makes the Sensualist about average in my opinion. 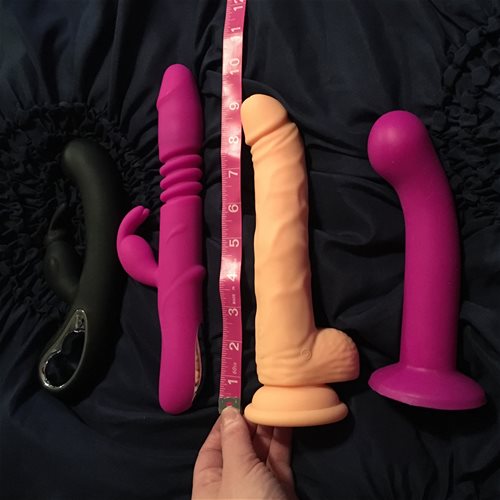 The suction cup works really well, I've been able to test it on a number of surfaces including my desk, shower wall, and table. It holds very well to being wiggled and jiggled, and there is a minimal show to it really giving up, I literally lifted my bedside table with this bad boy. I'm quite surprised that with how heavy and firm the shaft is that the toy stands very straight up even when placed horizontally on a wall. 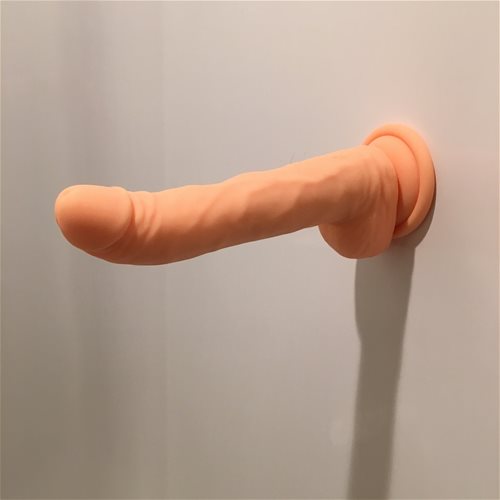 I really enjoy how this toy performs, and it exceeds my expectations for a rotating shaft toy. I've never really had the best luck up until recently with this sort to be honest, and it's wonderful to find some that can really keep up.

The vibrations and rotations are located in the head and upper shaft of the toy, putting those sweet sensations on the most delicate of spots. I do say that I'm a bit of a power queen and this bad boy preforms above where I expected him to. On top of the 10 functions of rotations and vibrations, there's also this "Turbo Button" as I like to call it that boosts him up to even faster and stronger vibrations and rotations. It's a sweet bonus that really sends me soaring, It will switch back to the normal setting after a little bit but the button to make it happen is pretty easy to find.

There are two buttons on this toy. The first of which is the power button, it is located closest to the base of the toy. Visually it looks a lot like a typical power button symbol that you'd find on a DVD player. To turn on you press and hold the power button for about 3 seconds. At this point, the LED behind the buttons will illuminate, and the toy will start rotating. This LED display changes with whatever pattern you run, for the typical rotation it starts out as solid but once pulsation setting is scrolled to it will flash with the pattern. To scroll through the settings simply press the power button. Located above the power button is that "Turbo Button" I mentioned earlier. The button is an image of a lightning bolt and certainly holds up to the image. It really jolts the toy forward into a much more intense setting than the others provided. To turn the toy off, you simply press and hold the power button for about 3 seconds until the LED is no longer on.

This toy is waterproof and submersible for some tub and shower time, with the suction cup base it really helps with this part and performs like a dream.

I don't really consider this a noisy toy unless you consider the noises it could possibly cause. It's not any louder than most, in my opinion, I'm sure your partner will hear it in the bedroom, and I'm sure if it's suctioned to the shower wall it will amplify it a little. I can't really say what It sounds like from the other side of the wall but do suggest this scenario. I'd say at its loudest it's about as noisy as a pair of hair clippers or an electric razor.

The charger plugs into the side of the toy near the balls. It's marked with "DC" and looks a lot like a bulls-eye. For me this toy holds a charge pretty well, I don't really use it for more than 20-30 minutes at a time but can say that I've used it twice without having to recharge. When charging the LED will flash until it is fully charged, when fully charged it remains solid until unplugged. The charger is very similar to other provided with EF toys, but I do suggest marking them to make sure you use the right one since they are different lengths and girths. Using the wrong charger could cause damage to the toys battery and internal workings. 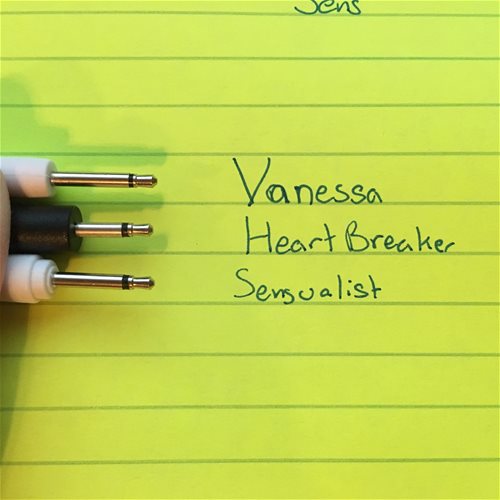 Comparing the chargers for: Vanessa, Heartbreaker and Sensualist.

Since this toy is made of silicone its really easy to clean and store. Toy cleaner, soap and water, or a 10% bleach solution can be used. This toy, due to its mechanical parts, cannot be boiled and you risk seriously messing it up if you choose to do so.

Only water based lube is recommended, with the use of other lubes you risk the possibility of messing up the toy and causing a reaction.

When storing you could use the box it came in, a ziplock or a toybox. Though be sure it doesn't touch other silicone toys or it could risk a possible reaction.

The packaging is certainly out there. After opening the plain brown shipping box you are met with some very noticeable packaging. With photos and text about the toy featured on all sides I really recommend wrapping if you're planning on gifting this bad boy. The box makes for good storage with a supportive cut out for the toy. Only thing I found fairly odd was that the charging cable and instructions for the toy was simply tossed into the brown box. It wasn't in the packaging for the actual toy but no notable damage was done. The instructions are really simple and not very informative. The instructions are printed in English and what looks to be Chinese, I'm not the best at identifying languages. 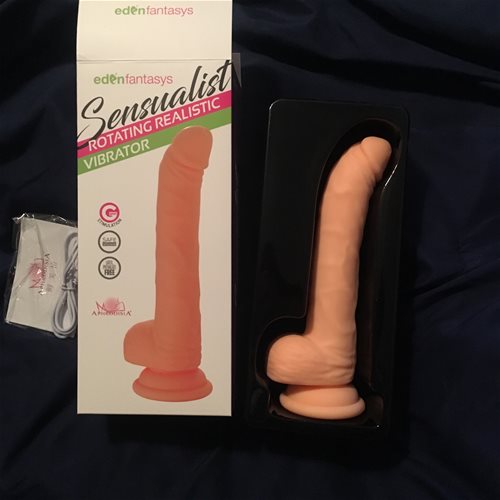 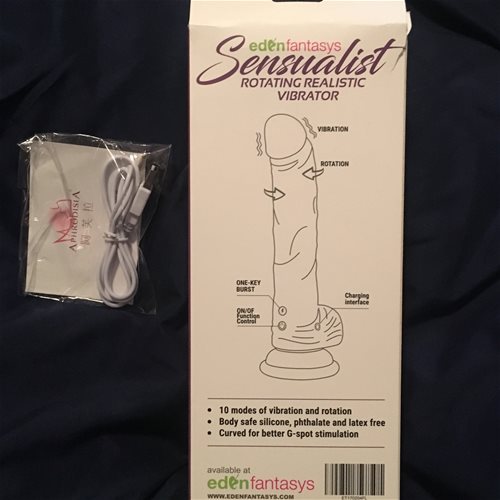 The only things I would add or change about this product would be adding a "just vibrations" and/or "just rotations" setting but honestly everything works great. More of a suggestion not a complaint since in the time of using it I did notice that there where no options for either to be solo. All notes aside I truly think this is a pretty fantastic toy and my new favorite dildo.
Follow-up commentary   I still like it 11 months after original review
He get's pulled out pretty often. The motor is cranking pretty strong still even with the pressure of orgasms. I'm very excited to see how long he lasts!
This product was provided free of charge to the reviewer. This review is in compliance with the FTC guidelines.