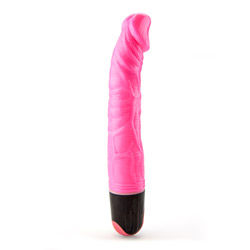 The toy has an insertable length of about seven and a half inches, so it's a bit longer than some vibrators, but the circumference is only about five inches which is pretty average for vibrators, so it's great for most people.

It's a flexible toy, but it does have a slight curve to it, especially at the tip of the toy where it's shaped like the head of a penis. The curvature isn't much, but it's perfect for g-spot stimulation.

The toy is made from TPR and kind of feels like a mixture of rubber and plastic. It's kind of soft feeling like an eraser.

It's a very flexible toy and isn't very firm at all. You can squeeze it almost like a putty in the middle, but the motor for the toy is near the top, so it's a bit more firm there. While it does have a little more "squish," if you use a little bit of lube it's not slack to the point that it's difficult to insert it.

It has a realistic shape and design, with a well-designed penis head and several veins running up the shaft. The head can be felt internally, but the veins are really more of aesthetic-only texture.

The material does pick up a little bit of lint and pet hair, so it's a good idea to wipe it off before use as well as after.

It has a realistic design and shape and a bright pink color. It has a shaft and a defined penis head, and veins running up the entire shaft. There are a lot of wrinkles added as well. While it is realistic, it also kind of looks like an alien penis because of the kind of the exaggerated amount of wrinkles and veins.

The head is quite a bit wider than the area of the shaft right below it and has a slight curvature to it, which makes it easier to hit the g-spot. The toy also tapers a little bit as it gets closer to the bottom. It's not a huge difference in size, but you do notice a stretching feeling if you insert it completely. It has an insertable length of about seven and a half inches, which is a little long but not impossible to use. It's about five inches in circumference which is pretty average. With a bit of lube, this toy is a lot of fun.

At the bottom of the toy there is the dial for controlling vibration speeds and the area you unscrew to add batteries. It's also large enough to hold onto while you're actually using the toy.

You only need two AA batteries to get this toy turned on. Unscrew the bottom to insert the batteries, and that's it. Nothing is telling you which battery needs to be + and which one needs to be - but since it only takes two if you're wrong the first time just do the opposite the next time, and it should work.

There's a dial on the bottom section of the toy, and you use the dial to turn it on/off as well as to turn the vibration intensity and speed up and down. The dial is very easy to push accidentally, and it's one of those toys that can get jostled in a drawer and turned on.

The lowest speed is a great beginner speed. It's not very strong, and it's not super loud while you use it. When you turn it up, there's not a ton of variation to it, but you can definitely tell it's getting gradually stronger. It's actually pretty strong on it's highest setting and would be great for people who like kind of stronger toys. As you turn it up, it does get louder, though. Even at the highest you wouldn't hear it over a TV or even a louder fan and closed door.

You can clean the toy with some soap and a damp cloth or any toy cleaner/toy wipes. The material can pick up a bit of dust and lint, so it's a good idea to wipe it before and after using it if you notice that. Since the dial is so sensitive, it might be helpful to remove the batteries, when you store it, so it doesn't get bumped and turn itself on.