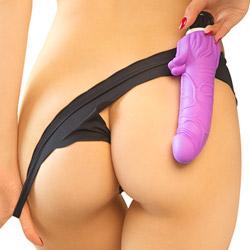 Absolutely fabulous. If you close your eyes and warm up the shaft with your hands first, you won't know the difference between this and a real human male's penis.
Pros:
Thick and realistic-feeling.
Powerful vibrations.
Potential g-spot orgasm.
Cons:
Battery case is hard to open.
Power button is sensitive.
Rating by reviewer:
5
extremely useful review
The Orgasm Enforcer (or Alien Enforcer) is magnificent. 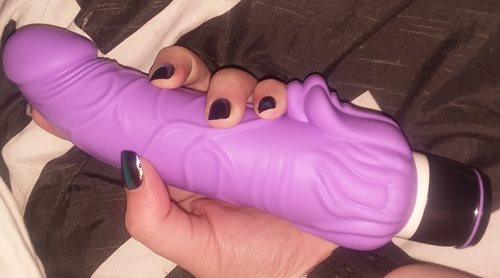 The silky silicone material is a sensual delight. If you've ever felt a real-life human male's erect cock, then you already know what this feels like. It feels incredibly legit/realistic. A firm, but slightly flexible vibe; with a soft, skin-like, texture. Just stroking it with my hand got me aroused.

And while I could only take in half of its full insertable length (and, therefore, couldn't make use of the "clit ticklers" at the base), it hit all the right spots. I squirted several times as it bumped my g-spot with it's slightly tilted head.

It's completely waterproof, so feel free to take "him" into the bath, shower, pool, or hot tub with you.

This toy is also very easy to clean with either soap and water or a toy cleaner. Though, since it's silicone, I recommend using a lint-free towel, as the material likes to cling to fuzzies.

Oh, and did I mention the vibrations yet? No? Well, they are AWESOME. There are seven different modes of vibration, and they all rocked my world. From steady vibrations to waves, to pulsations -- they were all excellent. Most of the vibrations are around four "vrooms," but there's also one gentle three "vroom" setting and a five "vroom" ("THIS CAR IS OUTTA CONTROL!!") setting. It covers all the bases -- from just warming up to earth-shattering orgasm -- all while being surprisingly quiet.

My ONLY complaint is the battery case and power button. The battery case, at least on mine, is VERY difficult to open to insert or replace the batteries. I actually had to use pliers to get it open because it was screwed on so tightly (which scuffed up the end a little bit).

He helped me lube it up and worked it inside me, thrusting it in and out to the time of the vibrations; penetrating me in an intercourse-like fashion. Toward the end, when I was fully loosened up, he started really pounding me -- increasing his speed along with my pleasure -- pumping it in and out in a steady rhythm, while aiming upward to continually make me squirt via my g-spot.

Toward the end, my boyfriend could no longer contain his excitement, and he had to touch himself; leaving me to control the Enforcer's actions. As my boyfriend stroked his long cock above me, I removed the Enforcer from within me and put the vibrating cock tip on my clit... and I exploded. The orgasm was one of the most intense I've had in MONTHS. And seeing me rocked with pleasure brought my boyfriend to climax as well.
Follow-up commentary   I still like it 3 months after original review
Three months later and the Orgasm Enforcer is still running strong. I've found other toys that I like even more (like the perfectly silent G Dancer!), but, when I'm majorly horny and only a HUGE "cock" will do: the Orgasm Enforcer is my go-to "guy." Umf! ;)
This product was provided free of charge to the reviewer. This review is in compliance with the FTC guidelines.

My Orgasm enforcer tags
About author