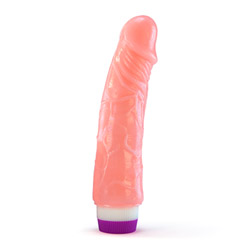 Great for those looking for a bargain and/or a bit of girth!

This is an inexpensive toy with great texture and basic functions, humble but indispensable in everyone's collection. If you don't get a bad one like I apparently have, once you figure out the battery issue, you're all set for lots of satisfaction.
Pros:
Multispeed, nice texture, easy maintanence
Cons:
Basic functions only, may be too big for some
Rating by reviewer:
4
No votes for this review
This is your standard everyday realistic vibrator--stripped down without those bells and whistles, nothing super fancy but pretty reliable for what it is. It strikes a good balance between soft and firm but can attract lint or other small particles, so it's a good idea to store it separately in its own bag.

I actually got two of these; the first one lasted a reasonably long time, but the motor is currently reaching the end of its life. The second one, strangely, only lasted two or three days before it also died. Perhaps I did something I shouldn't have, but I don't think so. I find it strange that the second one died so quickly; nonetheless, this is one of the most inexpensive toys on EdenFantasys, so I intend to buy another one very soon and see if my luck holds out better.