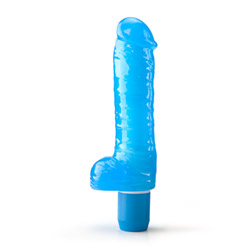 Do you need a friend? Well, the Fantasy Pal is here for you. He'll take you to new heights with intense vaginal and clit stimulation.
Pros:
Intense vibration, easy to use controls, extremely cute
Cons:
Head girth takes a moment to get used to.
Rating by reviewer:
4
useful review

Then I noticed the simplicity of the controls. A simple turn dial. Upon unscrewing it, I found that the battery installation was a little tricky. It took three AAA batteries. Although there were signs assigning each slot to positive or negative, I quickly discovered that I had to follow the arrows to the correct slot! Even so, it wasn't much trouble at all.

Then I noticed the real beauty of this toy. It was not a lint magnet! It smelled nice, not the new toy smell at all but closer to a new doll, and had no taste whatsoever.

They don't call this toy the Fantasy Pal for nothing. First, it looks like something straight out of a fantasy; then it is sure to become your best pal because it provides intense, amazing sensations that are extremely close to the real thing.

I have to say the girth takes a moment to get used to. It is one of those that has to pop beyond the pubic bone. This is due to the larger than normal head. The circumference is about 5 inches. Once inserted, it is that head that provides a ton of the stimulation, however, I could feel every inch of the shaft!

I chose missionary with raised legs to get an intense sensation and was really surprised when it began hitting spots that I can normally only hit during actual sex.

I used the toy with Eden Fantasy's Personal Lubricant. It made it nice and slippery but not so much, so that I could not handle it. The control base served as my thrusting base. I found the controls to be super easy. All I had to do was turn the dial to increase or decrease the vibrations.

The vibrations were super concentrated at the head and made for nice pinpointed stimulation. Even the balls at the end of the shaft quivered, which, when inserted, felt extremely nice. Although the head adds a ton of extra stimulation the veins just sort of got lost. Even so, it did not take away from the intense experience.

Because the head is large, I found that I needed to take a moment and go slowly to get used to the size before really getting into intense pounding. One thing I found out about the Pal is that he likes pounding and he is super comfortable while playing a little vigorously as well!

The vibrations were very strong. The strongest are actually at the tip and base of the shaft, with the middle of the shaft carrying very little vibration. This is likely due to the slenderness of the actual internal vibrating base in the middle. It goes from being thick at both ends to being as slender as a finger. However, this allows for increased comfort during use as it makes the entire shaft more flexible allowing you to try more positions!

The head makes for excellent clit stimulation. The vibrations are so strong in fact, that in a pinch you can also use the head as a massager for all over body use! Now isn't that a true pal?

This toy is actually more intense during use than during orgasm. It provides intense stimulation but does not provide a lot of extra room for vaginal contractions, so the orgasm intensity is a little less. It doesn't matter though. Everything else is extremely intense!
This product was provided free of charge to the reviewer. This review is in compliance with the FTC guidelines.