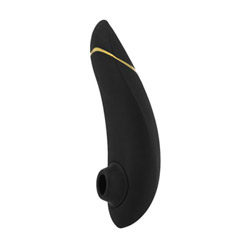 The Womanizer Premium is an amazing "pleasure air technology" toy and worth every penny. They advertise an orgasm in under 3 minutes, and I was able to have two in about that time.
Pros:
12 Intensities, Silicone, Waterproof
Cons:
You might not enjoy the sensation.
Rating by reviewer:
5
extremely useful review

The Womanizer Premium lives up to its name. Everything about this toy screams luxury from the windowed packaging to the toy bag that comes with it. Inside the box is the Womanizer Premium, the USB charging cable, a toy bag with a second "head" or "mouth" (whichever you prefer) inside.

The toy itself is soft silicone with little drag, very silky and smooth. It comes with a small amount of charge, but it's recommended to charge the toy up before use. It shouldn't take much longer than 2 hours, and you're good to go!

After the Womanizer was charged and washed, I wash every toy I get before use it, I was able to test the various functions including the smart silence which keeps the toy from turning on until it touches flesh. I tested this on my nipple first, and let me tell you it feels nice.

I noticed at first the design was a little big for my lady bits. I had some trouble finding my clit and placing the toy over it. I swapped the heads for the larger and deeper one and found it fit my anatomy a bit better. The design and width of the toy also made it difficult for me to keep it in place, but I figured it out quickly.

My main interested in the Womanizer Premium was to test it against the Satisfyer Pro 2, which has the much smaller price tag of the two. Many people online suggested "testing" the Satisfyer before throwing money at a Womanizer of any price point.

One of the biggest differences between the toys is the intensity, not the power. The "sucking" sensation, which is just puffs of air, feels smoother and less likely to irritate than the Satisfyer does at higher levels. The Womanizer does not have the same vibration that the Satisfyer does, and each level of intensity feels like a slow climb than jerking gears.

I was surprised when I was able to orgasm off the lowest intensity. It felt like a partner teasing and flicking at my clit, this setting would be perfect for edging. A second orgasm came quickly after when I bumped the intensity up a notch. There was no increased sensitivity or ache that came with the orgasm, just gentle sensations.

For my second round testing the Womanizer Premium, I decided to play with the Autopilot mode, which closely resembles different patterns. From my experience, it felt like a slow putter that randomly feels a little firmer then edges back down to a flutter. This, in my opinion, felt a lot like oral. Humans aren't machines, they have variations in their movements and their intensity. I closed my eyes and came quickly and was able to imagine it was someone there between my legs, not a premium sex toy. This is what blew me away.

The Womanizer Premium comes with 12 different intensity levels from a soft putter/flutter ramping up to a harsher tapping sensation at the higher intensities. I can't really take them, but it's nice to know they're there for those with clits of Valyrian Steel.

My favorite function, that I mentioned before, is the autopilot which will switch tempos and intensities making each playtime different than the last. The Autopilot comes with 3 different modes which are "soft", "medium" and "intense".

Here's where I'm glad that the Womanizer comes with such extensive documentation because I couldn't for the life of me figure out what the difference was in use. Some just felt nicer than the other.

Soft Autopilot varies intensity between 1-4, Medium between 1-8 and Intense is 1-12. You just press the Autopilot button and up or down to change each mode which is reflected in the 3 LED lights at the handle.

This toy gave me multiple cascading orgasms, which is rare and with little work. My Je Joue Mimi and We-Vibe touch have been the only two to help me out with that so far, but this did it too.

My orgasm was soft and unexpected, but intense. I didn't feel overstimulated from the orgasm which was able to pull me into another one right after. I LOVE THIS TOY!

Follow-up commentary   I still like it 27 days after original review
Still love this toy. This and the Satisfyer are my go-to and I tend to rotate them based on how I'm feeling. This offers more of a soft seduction and I've found that softly rocking or pulling the toy away and returning it offers a more realistic oral sensation instead of just lubing it up and letting it rest on my clit.

I've been able to achieve "cascading" orgasms on multiple occasions with this toy just rocking it back and forth as I orgasm. It's am amazing sensation. Worth the money for sure.
This product was provided at a discounted price in exchange for an unbiased review. This review is in compliance with the FTC guidelines.