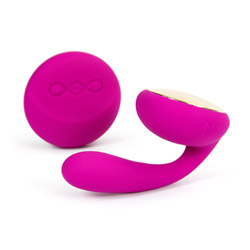 I expected a high quality luxury toy and that is exactly what I got! This toy is share able, powerful, unique, quiet, high quality and rechargeable. It is also one of the most versatile and unique toys I own. I definitely recommend trying this one if you are in the market for a luxury toy.
Pros
Super high quality materials
Rechargeable
Powerful
Cons
Controller could be rechargeable
Could be a bit bigger- if I had to be nit picky
Rating by reviewer:
5
extremely useful review

LELO has set the bar very high with this newest addition to the line up. Built to have a little bit of something special for everyone this toy will appeal to everyone regardless of genital configuration or sexual (toy) experience.

This toy has insertable parts, resting parts, is rechargeable, is easy to clean and keep clean, has different speeds and strengths, it has a remote control feature, and looks visually appealing. it is high end luxury that is perfect for gift giving or keeping for yourself.

The finger portion of the toy can be controlled via the flat disc which also vibrates and pulses in time with the finger portion. This turns a fun remote control toy into a truly share able toy. It is wireless and waterproof just for an added little bit of luxury!

This is a LELO toy so one should expect luxury materials and silky smooth textures. The Ida has both in spades. It is covered in the softest most silky silicone layer on both the insertable portion and the disc. The silicone is slightly matte but it slicks up quickly and easily with just a drop of lube. Most reviewers will insist that only water based lube be used but I have used it with silicone and hybrid lubes with no discernible change in the finish of my toy. Simply spot test a small area before slathering the toy in lube and carry on!

The bottom of the toy pieces is gorgeous shiny metal that I have trouble saying is silver or gold. It seems to change in the different lighting but it's gorgeous either way. It is stamped with the LELO logo and provides a great place to hold the toy. It feels luxurious.

This is a silky, smooth toy that is suitable for a first time toy or for a jaded old reviewer like me.

This toy is designed to be as exciting to use solo as it is to share and it hits the mark exceptionally well- as one would expect from LELO. The toy can be used as a remote control unit or as a single stimulator easily and with no loss of power. It is quiet and discreet.

I can see a bit of room for improvement...or maybe for variation (?) in how long and thick the finger portion is but I would expect the power to bleed away the larger and longer the finger becomes so maybe this is perfect just the way it is! Still a bigger base on the finger portion could turn a hand held device into a ridable one- just a thought.

The toy is just the right size if your G spot is easily reached or you really like being fingered to orgasm. Both are amazing for me so I have quickly fallen in love with this toy! Since the control disc vibrates as well my partner can tell just how much stimulation I am receiving and adjust accordingly. He can also use the disc to stimulate himself or me in another area.

The toy comes in a suitable storage box and it is small enough to tuck away in a lingerie drawer or toy box. It is discreet and good for travel. One of the oddest design features is the fact that the controller disc is powered by 2 AA batteries while the finger portion is rechargeable. It's almost like the controller was an afterthought. It works though and it is a very unique feature but I do wish the disc was rechargeable as well. 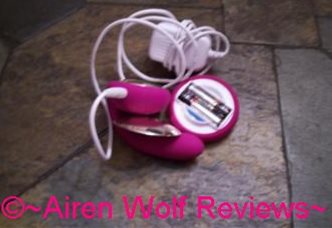 When I first saw the toy I had to take a moment to decide what the thing was actually designed to do. It's not that the toy is totally foreign it's just totally different than anything else I have in my collection. Once I had charged it up and had some time to hold it I realized that this is designed to be like a finger in function- and it works amazingly like the dexterity of a human finger. 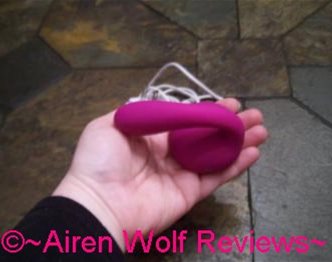 The finger part of the insertable piece is about the same length of my index finger and about the same size, that is to say 3.5 inches long and about 3 inches wide at the tip. It rotates in a small circle but given that the motor is in the tip of the toy it isn't a full circle only it also seems to reach forward at the apex of the circle like a "come hither" motion. The reach is slight but easily felt and totally different than anything else I have ever used except a finger!
The base of this piece vibrates and this is where the variation comes in to play. The vibrations go from steady to pulsating and then escalating with the push of the button either on the control disc or the toy itself. 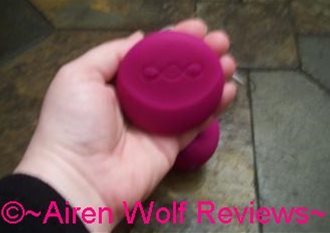 The disc controls the vibration strength and pattern of the finger portion and it also mimics the pattern so it can be used on a partner or another part of the same user's body. The controls are easy to figure out and damn near impossible to accidentally change during play. They are easy to change intentionally, however. This is a very quiet toy but it has a high pitched whine to it that carries. You can hear it being used in the room it is in but close even a thin door and you can't hear anything.

The Ida is waterproof and we have used it in our hot tub with no problems. I was worried about the plug in port but it seems to handle the heat and water just fine. Shower and tub use should be no issue either.

This is a silicone toy so a wash in hot water and soap is all it really needs. You can use a commercial toy cleaner or a 10% bleach and water spray in a pinch but be sure to rinse thoroughly.

Store in the box it comes in or a small box to prevent the toy from jostling around in a drawer or toy box.
This content is the opinion of the submitting contributor and is not endorsed by EdenFantasys.com