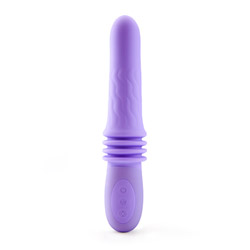 This toy comes packaged in a very nice box with little cutouts for the toy and the charging toy. It is one of those boxes you have to slide off a sleeve then open the lid. I like the color, and it felt pretty heavy in my hand. It did not have any instructions, and I found that odd due to the quality of the packaging. It also was a little thick and rigid, but I felt it would be a good size for the wife.

We tried it again. This time on myself. It is a little too big in diameter for me, but we tried it anyway. After a little warm-up and plenty of lubrication, I did get it inserted. I angled it to hit my prostate and turned on the thrusting action. It was ok but still a little uncomfortable, and if I let go of the handle, it would actually reverse thrust itself out of me. This toy would work much better if it was redesigned to be narrower and have a suction cup base. A thinner head would have less resistance, and a suction cup could let you use it hands-free, and it would still stay in or continue to thrust in instead of out.

Neither one of us had an orgasm using this toy. I am sure if we used it as a vibrator, the wife would orgasm with it, but we have better vibrators. I am not saying you won't have an orgasm with this toy, we just didn't have the patience with it to continue.
Follow-up commentary   I still don't like it 2 months after original review
Still not our favorite toy. A little too hard and not possible to be a hands-free toy. One suction cup on the base really would have improved this one.
This content is the opinion of the submitting contributor and is not endorsed by EdenFantasys.com