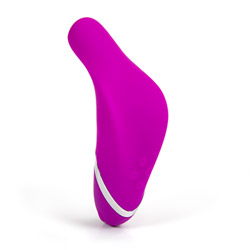 Upscale Vibes At a Down-To-Earth Price!!

The Eden Silicone Massager is a great toy for beginners and experienced vibe users alike. With a lovely deep purple color and silver accent band, this vibe looks like many of the high-end toys out there. Velvety silicone outside and a rechargeable multi-function motor inside make this a versatile toy for any collection.

As the name suggests, this toy is crafted of silicone. Silicone rates a 10 out of 10 on the Eden material safety meter. There is no odor, the toy isn't sticky (no lint collecting here!), and feels velvety-soft. The silver accent ring has no sharp edges or ridges.

The pointy-ish end is firm and houses the rechargeable plug receptacle under a small flap of silicone. This is a slightly odd arrangement and looks somewhat like a mouth or a scar on the toy. 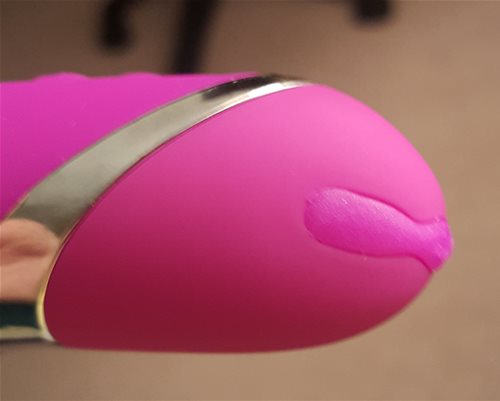 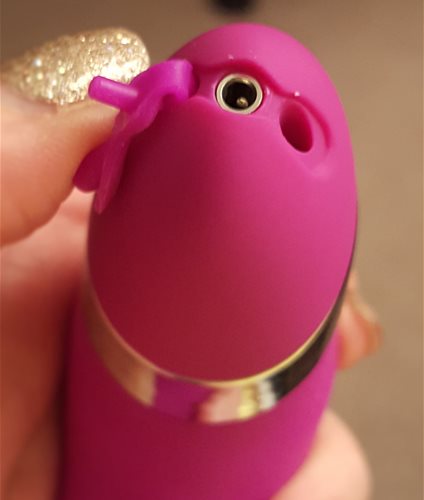 The flat 'business end' of the toy is flexible in all directions and easily and distinctly carries the vibrations from the other end of the toy.

The shape is ergonomic and fits both hand and body well. The flexible clitoral stimulating end means this toy can work for all body types. It is the shape of a small fat tongue and works well for clitoral stimulation, but could be used on other body parts as well!

The overall length is just over 4". Eden describes this as having an insertable length of 2.5" and that is true, but this is not designed as an insertable toy.

Just below the silver accent band lies a control pad of 4 small molded-in 'buttons' that control the power and speed/vibration pattern of the toy. The buttons are not obviously labeled: one up arrow, one down arrow, one + and one - sign. The up (or down, depending on how you hold it) arrow is the power on button and the corresponding arrow is power off. The same power on arrow also changes the vibration pattern when pushed again. There are twelve patterns to choose from, including steady vibration and various pulsing and roller coaster patterns. After cycling through all of the patterns, the thirteenth push turns the toy off.

The +/- buttons adjust the intensity of the chosen vibration in five steps.

After turning the toy off and back on, the vibration cycle starts back at the beginning, which is a steady vibration.

Silicone is easy to care for. Wash this toy with warm water and an antibacterial soap or a special toy cleaner. Eden calls this waterproof, but water-resistant is more likely due to the quasi-open recharge port on one end.

This toy is non-porous, but use condoms if sharing.

Fresh plus
$110.00
This product was provided free of charge to the reviewer. This review is in compliance with the FTC guidelines.