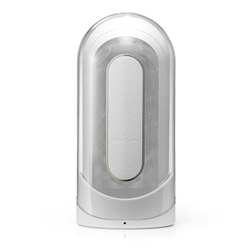 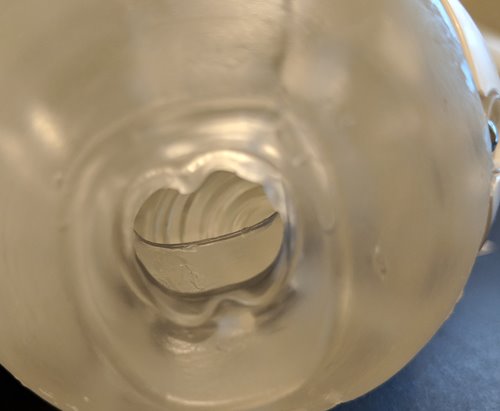 The sleeve material that directly is in contact with your penis while using the toy is of TPE rubber, which rates a 7 on EdenFantasy's material safety scale. It is slightly porous, which means the toy cannot be completely sanitized, so use condoms if sharing.

I was extremely worried about the internal texture, as it's extremely aggressive with all the bumps, ridges, shapes. As you can see in the photo below there is a lot of variety as you insert as well as on either side. I've had issues with Fleshlights with similarly aggressive textures not staying lubricated enough and causing painful rubbing. The Tenga Flip EV, which flips open, has you directly apply liberal lubrication throughout the toy before starting to use it, which significantly reduces this issue with the toy over the Fleshlight toys I've used in the past. It's still an issue with extended usage (over an hour) but you can always open it up and reapply throughout if needed. I've also found the TPR rubber to give way a bit easier than the Fleshlight material which helps as well. 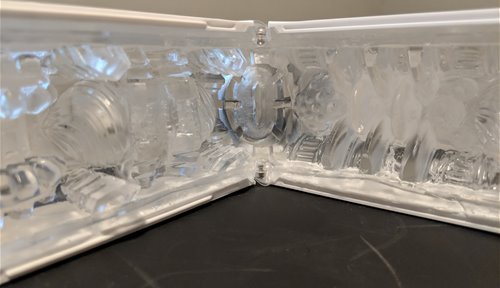 Initially, I really liked the design of this toy. It flips open making it easy to fully lubricate before use and clean up after use. It has small notches in the battery slide that allows the sleeve to be held open to dry after cleaning. The location of the two vibrators inside give sensations throughout the toy but also are on the opposite side and one is near the top and one near the opening. This gives you the ability to rotate the toy and get vibration sensations to different parts of the shaft/head when inserted. The opening is tight and there is a one-way air valve to allow you to provide suction once inserted, that can be controlled via the pressure pads as Tenga calls it. You can see this diagrammed below from the Flip Zero EV documentation on Tenga's site: The air valve/pressure is something that makes this toy amazing but is also part of its design flaw. I'm sure this is a side effect of me being in the 98th percentile for penis size, according to a British scientific survey that came out a few years ago. I've had some issues with male masturbators in the past due to this, but effectively after extended use lubrication seems to start coming out the valve and as Tenga didn't protect the battery to vibe connectors that are adjacent to the vent from ingress... lube gets in the connectors during use, which when you are applying current across causes the corrosion and eventual failure of the vibrator portion of the toy that I've already experienced and gotten a replacement for. You can see the valve opening and connectors pictured below (with minimal corrosion shown): 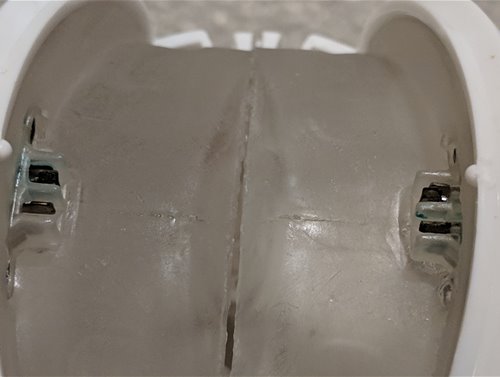 This seems to only impact a very small number of users, so seems to be something Tenga didn't test for... and it is likely I exceed their designed expectations. From Tenga, the toy is designed with an inserted length of up to 6.73 inches and up to a width of 2.62 inches, and I exceed that length by almost an inch.

Honestly aside from this one flaw, this toy is really well designed, and I honestly think I'll contact them more about it as I think it's reasonably simple to fix on their end. It's also extremely pleasurable to use.

The toy is extremely easy to care for, it flips open allowing you to clean all of the toy easily with warm water. If this wasn't the case it might be hard to get all the lubrication/ejaculate out of the toy after use. You then can just open the toy up and let it air dry after washing. Tenga even shows on their site/instruction manual 2 ways the toy is designed to be opened/air dried after use as you can see below: 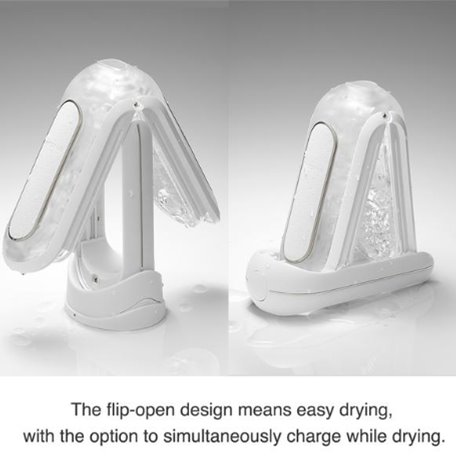 The toy is actually designed w/ groves to allow it to hold the toy for airdrying like that. I usually use the slide laid flat and the toy in the grooves approach, as I don't want it in the charging base until fully dry. Once fully dry the whole toy can be stored in the charging base w/ the provided plastic case to keep dust off the toy.

So unexpectedly 32 days after receiving this toy, the vibration functionality ceased to work. It appeared directly related to corrosion that was happening at the contact points between the battery/slide component and the toy/sleeve component, which you can see pictured below. 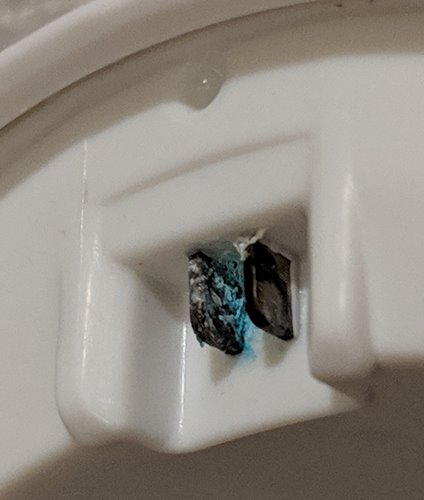 I can't determine if this is due to lube leaking out of the sleeve and getting in-between the contacts during use or some other cause. According to Tenga support, this is something they have seen in a few cases previously; however, they were quick to respond and send out a replacement toy with-in 24 hours of me initially contacting them. I held off on this review as wanted get some multiple uses out of it before reviewing, and that was further delayed as I wanted to see how well Tenga supported their toy since it comes with a 1-year warranty. I was impressed with the support I got.

Worth noting the replacement seems to be showing some of the same corrosion, so curious how long it will last.
Follow-up commentary   I still like it 4 months after original review
So as a follow-up, Tenga has now sent me a 3rd replacement for the toy... which will make it the 4th one I'll have gotten. There are connecting wires in the TPE rubber to connect the battery/controller on the slide to the vibrating bullets in the toy material. Turns out as I've discovered now that I've had 3 of these toys fail on me that these wires are prone to pull apart, which causes short-circuiting in the TPE material so reduced vibration power & intermittent functionality... eventually the wires fully separate causing all the vibration functionality to stop.

I still love the toy, even without vibrations it's extremely pleasant to use. And I've been happy with the fact Tenga continues to support the product and send me replacements.
This product was provided at a discounted price in exchange for an unbiased review. This review is in compliance with the FTC guidelines.

Reviewed by MrClark (Eden Advanced reviewer) Be careful what you google
Rank
5.6
wrote 81 reviews
This review was edited by
Comments
Make a post
Forum
No discussions yet.
Thank you for viewing Flip zero vibrating – vibrating masturbator review page!
Top