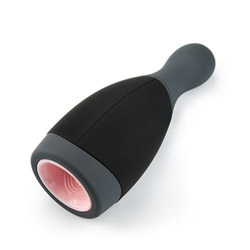 An experienced user might find this toy somewhat bland. The vibrations may not be positioned correctly for everyone, and those seeking discretion for their toys should definitely look elsewhere. The air sensor in the handle is an interesting feature, however, and something that might appeal to some users.
Pros:
*Can customize the patterns
*Can work hands free for some
Cons:
*Way too noisy
Rating by reviewer:
3
extremely useful review

I found that the best way to use this was a teaser. You have to hold Scout in at least one hand in order to use it. It does provide some stimulation to your cock, but not an abundance of it. A couple might get more use out of this than a solo man, for the teasing factor.

Most of the outer casing is a hard plastic shell. The grip end of the toy is more of a soft rubber material. The toy had little to no smell other than a mild plastic scent when I first got it. The interior is greatly textured, and it can be visible due to the enlarged opening. The material on the inside is much softer, but still a little firm to the touch.

Overall, I feel that the interior could have been a little looser. The firmness detracts from the stimulation but is still enough to build you up to a nice orgasm. It just could be better than it is. The size of the toy may give some pause. It looks a lot bigger than it needs to be, for what it does. It's not something easy to hide, and would definitely stand out in luggage during travel.

This is a weird one. There is a three-button control system. The bottom button turns it on, but it won't start vibrating until you press the middle button to select a pattern. You can then squeeze the bulbous end to customize the vibration to a certain extent. The top button will turn the light on the handle blue. From the image on the button, I believe this is a lock that you can use to lock in the alteration caused by squeezing the tip of the toy. I found this a handy feature. You can tweak the air pressure the way you want it, and then lock it in, so you don't have to continue squeezing.

This is a TPR toy so that you can use water-based or silicone-based lubrication. Cleaning it is relatively easy. Warm water, mild soap, and maybe a toy cleaner if you want that as well. You can remove the base of the toy in order to pull out the interior for cleaning. To store it, I found it best to use a plastic bag or medium-sized box to store the toy.

Personally, I found this to be an average toy. I tried it hands-free, just setting a pattern and leaving it alone. But quickly found this didn't give nearly enough stimulation, as the move of the vibrations seems to emanate from the handle and upper part of the toy, with very little reaching down along the sides. Another thing I found was that it made an extreme amount of noise, something other masturbators I've tried didn't even come close to.

When using the air sensor feature, I found that the noise level increased much faster than the actual vibrational changes.
This product was provided free of charge to the reviewer. This review is in compliance with the FTC guidelines.