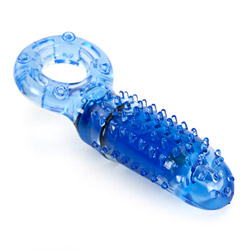 Not for us but will lead us to something better!

This vibrating cock ring was a let down. It is oddly shaped and easily picks up lint/hair, but has a removable cover and little nubs on it for the girl.
Pros:
Has nubs on it for the girl, good vibrations
Cons:
jelly sticks to every thing, not very good for its intended use.
Rating by reviewer:
2
useful review
The OYeah Vertical Vibrating Ring uses 3 common watch batteries, the batteries included last 80 hours. Its made of TPR Silicone (also known as CyberSilicone), compatible with water based lubricants like Astroglide and Maxumis. You really need to clean the toy before and after you use it with warm water and antibacterial soap because it easily picks up lint and hairs. The OYeah Vertical Vibrating Ring is small so easy to hide its also pretty quite too. You could easily use this toy in a small space or with roommates. The vibrations were on the stronger side and it vibrates through out the whole toy. It was a pain to remove the vibe to change the batteries. I suggest not taking the whole vibe out, but just enough to unscrew the bottom to replace the batteries. You can have fun in the shower or bath tub because its waterproof. The little vibe inside the sleeve can be removed if you decide to hold it instead. The vibe looks like its made of a hard plastic. The whole item is just over 4 inches tall but the vibrator inside is only about 2 inches tall. It has no smell like some toys have and it doesn't have any taste either.

Me and my partner have never used any kind of ring on his penis before so this was our first time. First I wanna say we were very confused. I mean we had no idea how this was suppose to go on, when he was soft or hard or how it should be done. Over all I will say that we wont use this item again.

I personally really liked it when I was on top. When I was riding the vibe it could actually rub against my clit. He said that was kinda painful cause when I was doing it the vibe was also digging into him. We tried using it in other positions but it really was not effective. Even though we were not totally satisfied with this item it definitely makes us want to try other items like it. On the plus side this is good to use if you stick it on you finger and hold it against the clit. I wouldn't suggest this for beginners, if anyone for that matter, its hard to keep clean and seems to provide very little fun for the men.
Follow-up commentary   I've started to like it more 11 days after original review
Once I took the vibrator out of the jelly cock ring, I enjoyed it so much more! I can just hold it up to my clit, and it's much more satisfying. He doesn't feel it, but he doesn't mind.
This content is the opinion of the submitting contributor and is not endorsed by EdenFantasys.com

My O Yeah tags
About author