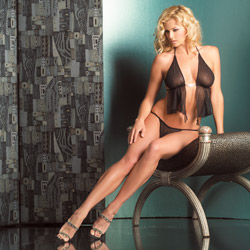 Hot, but probably only once

If your intention is to slip it on, prance around the room for a few minutes and then tear it off, this is perfect. For repeated wearing, pick another bottom to go with the camisole.
Pros:
great look for small and big breasts alike, looks expensive, comfortable camisole.
Cons:
g-sting is poorly constructed and sized awkwardly.
Rating by reviewer:
4
useful review
This bit of lingerie (and I really do mean "bit" because it's not a lot of coverage) is hot: sexily steaming hot. But it's also evidently meant to be worn approximately once in its entirety.

I wriggled my way into the camisole top with a little bit of finagling and was pleased as punch with the results. It's not actually difficult to get into or anything, there's just not a lot of fabric and the extra loops of ribbon meant to help hang it on a hanger are just as substantive as any other part of it, so it took a moment of eye-balling before I knew what to do.

The look is stellar, something flattering for the well-endowed and un-chesty alike. It added mystery with the thin veiling of sparkly fabric, even though it barely covered me. Two long drapes adorn the front, creating eye-catching lines and emphasizing curves while two smaller drips of fabric down the back acted as sexy garage doors for my lower back tattoos. The rhinestones are an excellent touch, accentuating the Vegas showgirl nature of the look and keeping everything in place. While its translucence means I certainly wouldn't be able to wear it anywhere besides the bedroom, it was cuter than a lot of slutty clubbing shirts I see regularly.

It's the definition of superfluous, a perfect example of lingerie meant to accentuate nudity; so it requires a modicum of comfort with one's body, as compared to a corset or babydoll that might help hide areas of self consciousness.

The g-string is adorable with a tiny, sparkly front and super sexy back. The middle string (it's barely more than dental floss and not the most comfortable thing I've ever had between my legs) can be slid along the waist-line string in the back, which is a handy and seductive feature. But that's the last of the good things I have to say about the thong: it's poorly made and started to fall apart within moments of being worn. The fabric separated from the string-like structure instantly and was so small as to be more annoying than hot. Clearly, it was meant to be removed by an amorous partner. It's doubtful it would survive a second wearing.

The look is superb and the camisole will make an enjoyable addition to a lingerie line-up but the g-string is useful only for a matter of moments, during the unveiling.
Follow-up commentary   I still like it 13 months after original review
Still love it. I've worn it for shows and my fellow dancers are jealous as hell. Because it is see-through, I have to have a bra on underneath, but it doesn't actually look bad that way at all. And if you want to wear the top with jeans, a skirt or other regular clothing, it makes a pretty spectacular (and slutty) look.
This product was provided free of charge to the reviewer. This review is in compliance with the FTC guidelines.