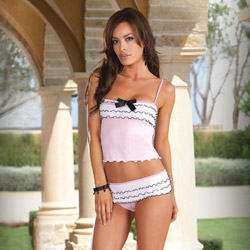 Pardon My French, But You F***ing Rock

The top won't do anything for smaller breasts, but you won't feel like you're wearing a training bra either. Larger breasts might be lacking adequate support. But other than that, I feel very confident recommending this set to just about anybody. It's super comfortable and pretty much guaranteed to make you feel good about yourself.
Pros:
Soft, super comfortable, well made, and adjustable/removable straps
Cons:
Bigger breasts won't have adequate support. Some don't like pink?
Rating by reviewer:
5
extremely useful review
Pardon my French, but the Pardon My French set f*cking rocks. It was comfortable, there weren't tons of frills, and it was pink. I was sold before I found out it was as comfortable as it was.

Like my last selection from DreamGirl, this set came in a plastic bag inside of pink tissue paper.

If you're between sizes, I would recommend ordering the next size up.

This set is composed of two pieces, a top and a bottom. The top is longer, like a shirt, and on most will end around the belly button. Both the top and panties are made of the same very soft and silky light pink material. It's really stretchy and almost feels like a bathing suit to me, but I would avoid using it in that manner. There are no designated cups, so there's no real support for those who need it. The design of the top is a tube design and the adjustable straps are removable for those who want to wear it that way. Laid flat from seam to seam across the top measures 12", but stretches up to 18". Down the side seam is about 10 1/2" and stretches up to about 15", but stretching it down will just result in the top springing back up to where it was once you let go. Across the bottom stretches up to 20". Across the front is 3 columns of white ruffles edged with black that total about 3" tall, and in the middle of the front on the top is a black bow.

The bottoms have the same columns of ruffles, except they travel all the way around the top of the panties. The black bow on the panties is placed on a keyhole opening in the back of the panties, rather than on the front. Laid flat, the panties measure about 13", but stretch up to 22" across the top. They're about 6" tall. Each leg opening is about 9" wide, but stretches up to 14". DreamGirl thought to add a cotton liner to the crotch, as well as 2" long satin-like straps meant for hanging.

Both pieces feel extremely well made. Stretch, tug, or pull all you want. You're going to have to try really hard to get these to break. The silkiness of both pieces initially made me feel as though everything would snag these, but most things won't. I would keep these away from anything that would snag a regular t-shirt.

Both the top and the panties have care tags. They let you know that they're made from 90% Polyester and 10% Spandex and should hand wash in cold water and line dry.

You can keep these anywhere you keep the rest of your delicates; but, with the attached hanging strings on the panties, I see nothing wrong with hanging these up in your closet.
Experience
I could not believe how comfortable this set was. I would wear these panties as regular underwear and, with the crotch liner, I just might.

The top didn't do anything as far as making my boobs look bigger or more awesome in any way; but, after looking at the model, hers didn't either. I was just happy that I didn't feel like I was wearing a training bra. Either way, my breasts were still visible as breasts. Those with bigger ta-ta's are going to fill the top out better; however, if you're not naturally perky you're probably going to run into an issue with support. I also really liked that even though the material is slightly see through, it wasn't really obvious. The ruffles covered my nipples, (which I liked), but for giggles I moved the top so they weren't covered. While not the darkest nipples ever, they were still visible slightly through the material. Darker tattoos will show the same way.

The panties, I could wear them for days! I really can't think of a single bad thing to say about the panties except that the ruffles might cause a problem if you're wearing them as regular undies with jeans. But even that's a stretch.
Follow-up commentary   I still like it 17 months after original review
I don't wear it very often, but when I do it's still very comfortable. I still like the panties more than the top, but if you can find the set elsewhere, I think it's worth looking into.
This content is the opinion of the submitting contributor and is not endorsed by EdenFantasys.com

My Pardon my French cami set tags
About author

Reviewed by Jul!a (Eden Writer) To the critics who despise us, go ahead and criticize us. It's your tyranny that drives us, adding fire to the flame.
Rank
7.5
wrote 560 reviews
Comments
Make a post
Forum
No discussions yet.
Thank you for viewing Pardon my French cami set – camisole set review page!
Top