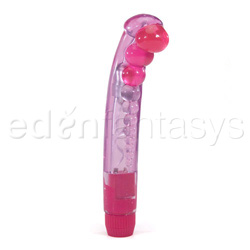 This time, though, we had had more of a chance for foreplay, and my body was still screaming for his touch. Careful to not hurt me, he rubbed some lubricant inside of me and gently inserted himself. After a few minutes of his gentle touching and caressing, I achieved a small orgasm.

When it came time to clean the 2-toned vibe up,&nbsp; most of it was a breeze, with the exception of the nubs. All the little crannies around the nubs were kind of hard to clean. I had to use a paper towel and press it against the toy with my nails in some areas. Plain, gentle dish soap and hot water worked well on it.

Maybe, after some experience with other g-spot vibrators, I will find myself enjoying this one.
This product was provided free of charge to the reviewer. This review is in compliance with the FTC guidelines.