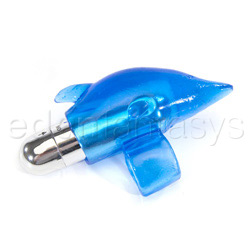 A Can of Tuna is Better!

If you're shopping for your first toy ever, then this will do just fine. Yet, if you're a seasoned veteran of the toy market, it's probably better if you keep moving through.
Pros:
It's cheap, good beginner toy.
Cons:
Weirdest Battery Type EVER ("N"?), Barely Feel Vibe, Ridiculous Design, Poor Craftsmanship.
Rating by reviewer:
1
extremely useful review
I actually ordered this item by accident, but I decided to give it a fair try. When I received it, the packaging looked promising. It was easy to open (no scissors required) and included small sample of lube and toy cleaner with the product. However, that’s kind of where the beneficial side of things ended for this toy. After one use I realize that this was a “training toy”--like women’s bras. They offer very minimal stimulation and are pretty much only good for those who’ve never had a toy before.

The vibrator as a whole is like some inside zoophilia joke. Why can’t something just be sleek and sexy anymore? I love the idea of color choice, but items that have a face on it creep me out. The only thing with 2 eyes I want in my groin region is my boyfriend or my gynecologist. I was originally afraid that the material would be some hard plastic, but I was fortunate that it was actually jelly. Which feels great, but almost completely numbs the vibrations from the bullet itself. I also wouldn’t recommend adding any lube to this as well because the ring on it is made from jelly and it’ll totally slide off your finger if you’re not paying attention.

The bullet is another source of annoyance with me as I tended to avoid the sleeve when use it. It’s made from relatively thin plastic, so if you roll over it in the middle of the night you could possibly crack it. The plastic also has small ridges along the seams that could give you a nasty scratch somewhere you don’t want one. And it’s a twist switch which is awful because the current is conducted through a thin metal strip for operation. (Meaning if you break/block the strip, the vibe will fail to start.) So toy abusers beware, you might want to invest in something a bit more sturdy.

My biggest problem with this stimulator beyond the design and craftsmanship is the choice in battery. “N.” I’d never heard of it before, and I consider myself to fairly up on technology. As far as I can tell it was a battery used in a marginal amount of manual cameras, and has since become virtually obsolete in the gadget world with most things drawing power from some kind of wall-charger. I guess the “N” stands for “Never going to find me in your local retailer without a miracle.”
This content is the opinion of the submitting contributor and is not endorsed by EdenFantasys.com