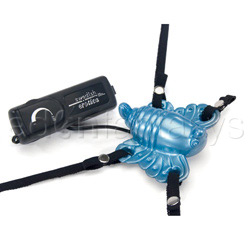 A Great Little Foreplay Toy (once you figure out the straps)

This toy is worth it if you really want to be hands-free and have some patience with putting it on. It's also great if you don't like or aren't used to strong vibrations, and it works well during foreplay to get you in the mood.
Pros:
Hands-free, easy to position once on, comfortable, moderate vibrations, great for foreplay.
Cons:
Straps difficult to figure out, not comfortable during intercourse.
Rating by reviewer:
3
useful review
When this toy came in the mail, I was anxious to give it a try, and my husband was eager to start the testing for my review (he loves to participate). This toy was a bit more humorous than either of us expected, although we were generally pleased by it.

I thought that a strap-on like this would be a lot of fun and would free up my hands for other uses instead of tying them up holding a bullet on. Well, it was fun, and a lot of laughs in the process! It took forever to figure out exactly how the straps were supposed to go. There are 3 straps attached to 4 slots on the butterfly, and I spent a lot of time studying the box and trying to figure which straps went around my legs and which one was supposed to be around my waist. After many interesting and unsuccessful attempts I gave up and strapped it on the best I could, which was around each leg and the extra strap tucked in. The straps were pretty stretchy, so they fit well and were not really uncomfortable. I was hoping that it would stay in place without the waist strap (and that seemed to be the case). Once the butterfly made it on, it was time to play.

The butterfly was soft, and smelled a bit funny out of the box (it is phthalates-free, but made of jelly, so don’t share it with anyone) but a quick wash took care of that. It was a good size and covered my mound comfortably. The wing spread fit just right, and it was not uncomfortable or awkward for me to walk around. The vibrating egg inside the butterfly was attached by a cord to the remote, and I was able to tuck it in under one of the leg straps so it wasn’t dangling. This worked pretty well. The vibrations went from very low to moderate, and were surprisingly quiet. I didn’t find them very intense, but they were definitely stimulating, and after about 15 minutes of foreplay wearing the butterfly fluttering at high speed against my clit, I was definitely wet and horny. We did remove the toy before sex, as it wasn’t as comfortable then and kept getting in the way (taking it off was a bit easier than strapping it on).