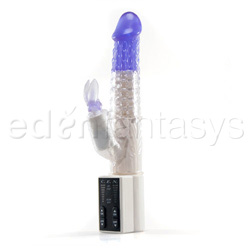 A great toy to have

Best orgasm I had by myself great for foreplay or during sex takes little effort to use anyone could have fun with it.
Pros:
Great orgasms good for when you're short on time.
Cons:
Don't think I'd change anything about it.
Rating by reviewer:
4
useful review
This toy is great to have I don't personally own one but I have used one several times.

It's great for women that don't have a lot of time to spend pleasuring themselves. Also good for someone like me that sometimes just wants to get it over with.

Used this alone which was awesome and with a partner which was even better using this right before sex makes your orgasm even better well at least for me it did. It's fairly easy to adjust may take some getting used to the controls. I'll admit I had some trouble with it at first using the controls I kept accidentally turning it up waaay too high and even turning it off. It's also fairly easy to clean I found some wipes made for toys that work fairly well. It's great to use with or without lube I used it both with and without I prefer without it seems to have a better feel to it. I've used this before and during sex it makes a good teaser for you or your female partner and a great power trip for your male partner since you can control the speed. Make sure you keep plenty of batteries on hand though because if you use it a lot they run down fairly quickly. I turned the one I used on low and thought it was off and killed the battery so at times it's tricky to know if it's off. I love the various combinations you can choose with the speed settings it adds to the pleasure.

Remember if you share your toy with someone cover it with a condom to reduce the risk of infection or std transmission. It's great to have fun but it loses its fun if you end up catching something or spreading something so be safe and have fun.
This content is the opinion of the submitting contributor and is not endorsed by EdenFantasys.com

My Techno rabbit tags
About author