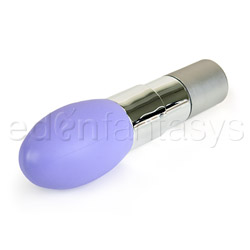 A Light Kind of Magic

The Pocket Queen is a good clitoral stimulator with a pleasing design. Although it only has one speed, it is fairly powerful and takes a standard AAA battery. A good choice for beginners and advanced users alike.
Pros:
Good vibration, compact size, phthalate-free.
Cons:
Only one speed.
Rating by reviewer:
4
useful review

The Pocket Queen by Nasstoys works best for clitoral/external stimulation. It can be used vaginally for shallow penetration and delivers vibrations in the vaginal opening, but it is too short to provide adequate stimulation this way. It should never be used anally due to its lack of a flared base.

The Pocket Queen is composed of two different materials. The tip is made of TPR, while the base is made of ABS plastic. The toy has no smell or taste. The tip is soft to the touch, has some give to it, and is very smooth.

The Pocket Queen is shaped somewhat like a Christmas light with a long base, with an overall length of 3 1/2". The tip is bulbous, and about 1 5/8” long. It is just over 1” in diameter at its widest point. The base portion is about 2” long, and silver in color.

The Pocket Queen is powered by 1 AAA battery, which is not included. The base unscrews for battery insertion, and the battery is easy to both insert and remove. To extend the battery life, the battery should be removed when the Queen is not in use.

The Pocket Queen is waterproof, but care should be taken to screw the cap tightly on the base so water doesn’t get into the battery compartment.

The Pocket Queen is made from both TPR and ABS plastic. TPR is more porous than silicone, so condoms should be used if you’re planning to share. Both TPR and plastic are phthalate-free.

This toy can’t be disinfected, but can be cleaned with mild soap and warm water or a toy cleaner. Both silicone and water-based lubes are safe to use with the Pocket Queen.

The Pocket Queen comes in an easy-to-open plastic clamshell.

The Pocket Queen works best by positioning the bulb onto your clitoris with the button facing outwards. This allows for easy manipulation and movement of the bulb if necessary to target vibrations.

I also used this with my husband a few times, and he thought the vibrations were too strong on his penis when we were in missionary position, but when he wasn’t in direct contact with the Queen, as in doggie-style, he found them just about right.
Follow-up commentary   I still like it 4 months after original review
I still like this as a warm up toy. It's compact enough to throw in my purse, and it's fun to use before progressing to other toys.

The Pocket Queen doesn't seem to drain the battery very fast, and I like that it uses a AAA instead of watch batteries.
This product was provided free of charge to the reviewer. This review is in compliance with the FTC guidelines.