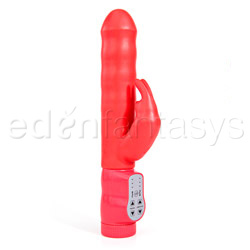 A little short on the Passion side of things

We were really excited to try our first rabbit style vibrator, but unfortunately this one didn't live up to our expectations. The novel concept of the toy combined with all the functions were really exciting to experience at first and actually produced some pretty good orgasms. But after the "new toy" excitement wore off, the Passion Wave stimulator became a toy of little use. Fortunately, the thickness of the toy will still get you off even if you don't use the other functions.
Pros:
The thickness of this toy is definite plus.
Cons:
Wave motion is too subtle.
Rabbit ears seem to "poke" too much.
Porous TPR material.
Rating by reviewer:
2
extremely useful review

This toy is made from a substance called TPR, which was a first for us. We tend to be fans of materials that are easily sterilized and this material really doesn't qualify as one. Having said that, we feel that a good cleaning is good enough to use the toy without a condom over it. However, it's nice to have that extra piece of mind that the higher quality materials provide. You'll also notice that this material will collect lint and hair if not isolated from fabrics, which can be pretty hard when using it around bedding. On the up side, the material really doesn't have a bad smell to it and it's not uncomfortable when using. It's kind of like having a rubbery covering over a firm inner core that does not bend or flex at all. The rabbit vibrator portion is very soft and the ears are very flexible and do vibrate with some pretty good intensity.

One strange feature that we've noticed is that it seems to "sweat" a glossy substance that I think is lubricant that has been absorbed by the material a little. Even though the toy gets cleaned well after every use, it still does this. If this is what's really happening, then it proves the fact that TPR is a fairly porous material.

I've already mentioned that the thickness of this toy is really its best feature, in my opinion. It's not absurdly large but definitely makes its presence known. The shaft is thickest at the head at 1-3/4" in width and tapers slightly as you go down. The insertable length is around 5-1/2" but you'll probably find that a shallower depth is required to position the rabbit ears right on your clit. If you want it a little deeper you can take the rabbit vibe and bend it up above your clit and enjoy a little more of the thick shaft. Since the shaft will not bend at all it really doesn't focus in on the G-spot, which would have been nice. The shaft does have ripples on it from the wave mechanism within that are rather pleasant when thrusting in and out. However, this toy is pretty awkward to thrust because the rabbit vibe gets in the way and bumps into your clit. I think the toy is more or less designed to do the work for you without the need for a lot of movement. Overall, the toy is not discreet at all and stands out among the others with its deep red color and size. I would never try traveling with this thing since the security guards would probably see it on the scanner and think that Inspector Gadget had lost his winky!

The Passion Wave Stimulator has two separate controls; one for the vibrating rabbit and one for the wave motion in the shaft. Each function has a low, medium and high setting that operates with just a push of a button on the control panel. The separate buttons are mounted side by side and have small lights that give you visual cues as to what intensity level you are on. These controls are fairly easy to use, however the buttons are very subtle and may be hard to find in the heat of the moment. The toy requires four AA batteries that are very easy to install correctly and seem to last a pretty long time. This toy is also waterproof and has performed well in the shower without any problems. However, we have never tested it completely submerged. As far as the noise level is concerned the vibrating rabbit is pretty quiet but the wave motion is fairly noisy (especially when set on high). I wouldn't say that the noise of the waves is a big problem though. If the wave motions were more pronounced I think this function would be a hit, but unfortunately they don't provide that much stimulation.

Taking care of this toy is pretty easy. We have never had a problem storing it next to other toys and have used it with both silicone and water-based lubricants without any problems. Other than the strange "sweating" property that I mentioned above, this material seems pretty stable. The TPR material also seems pretty durable and tear resistant. If you take the time to store it in a lint-free container it may save you some time in having to clean it before each use.
This content is the opinion of the submitting contributor and is not endorsed by EdenFantasys.com