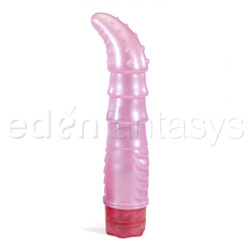 A lot going on!

So in conclusion this is not for the beginner. The point might be a bit much and I would think a rounded tip would be more comfortable. Now if you're more experienced and like an aggressive toy then this could be the toy for you!
Pros:
Waterproof, good vibe, lots of stimulation.
Cons:
Point is painful for her.
Rating by reviewer:
2
somewhat useful review
We were looking for a water safe toy and she settled on this. It had a slight rubber smell when I opened it, but it wasn't too bad. It was her turn to pick as I had picked the last one and was a bit surprised to see this as it has an aggressive appearance. She usually likes a little more subdued toy, but hey...

Him: I was looking forward to the night's festivities with our new toy. I teased her nipples and body with it as I moved into position. I teased her clit, as the curve is perfect for sliding between her lips and over her clit. She loved that! But as I began to ease it in, it became apparent she was uncomfortable. I went slowly and after getting the curve in and working gently, she had had enough. It was just too uncomfortable for her. So we went back to old faithful... me! Yeah me!

Her: Yes, it was my turn to pick and I was trying to find something new that we didn't have in our "tool box". Being that it was waterproof and a supposed soft material, I thought it would be good choice. I enjoyed the beginning action, it has good vibes and the outside bumps feel great on my outer lips. But once he was trying to put it inside my pussy, the g-spot curve became really hard and was more painful than pleasurable. Unfortunately, I couldn't go on. Now, it wouldn't be a problem for most of you but I am rather small and tight, which my husband enjoys but it becomes a problem with some toys!

So in conclusion this is not for the beginner. The point might be a bit much and I would think a rounded tip would be more comfortable. Now if you’re more experienced and like an aggressive toy then this could be the toy for you!
Follow-up commentary 2 months after original review
It’s still a little intense for us to use for insertion. She loves it for clitoral stimulation. I'm sure there are those out there that will love this toy, but for us it is just not right. The tip is too pointy and firm for her.
This product was provided free of charge to the reviewer. This review is in compliance with the FTC guidelines.