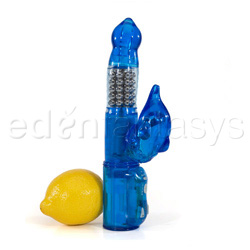 All in all, a great toy, that I am happy to add to my collection. I am glad to have a rabbit style vibe that works with my anatomy.
Pros
Size
Works with my anatomy
lots of function combos
Compatible with all lubes
Cons
The Battery Cover
Material (Smell)
Kinda heavy, could be awkward
It's a little on the loud side
Rating by reviewer:
4
useful review
I think I am going to start off with the things I LOVE about this toy.

I love the size, with an Insert-able length of 7" and a Circumference of 5", this is a decent sized toy. The Dolphin is also fairly large. This is the first "rabbit" style toy that I have used and that works well with my anatomy. It's fairly powerful, has a number of settings and the vibe and gyration are separate controls, which also makes me happy.

The Controls include an On/Off Button (controls the on/off of the vibration), the Up and Down arrows for the gyration (turns that function on and increases or decreases the speed), and the vibration function button (which scrolls through the different speeds and patterns).

It's a decently strong vibe and works well.

The Rotating beaded shaft has 6 levels of speed. The Controls light up and the buttons are also glow in the dark (although I haven't really tested that little feature out yet.) The beads are "Non-jamming", which to my knowledge is true. I couldn't get the beads to stop by squeezing, so yeah, its pretty well done.

Starting with the packaging. The box is not too bad, but its not discreet at all. The toy itself was wrapped in plastic, that was stuck to the toy, when I was removing it.

It's heavy, it weighs in at about 1lb. I like a heavy toy, but it can be awkward to use.

The cover for the battery compartment comes off if you look at it funny, it drove me nuts when I was using the toy because the damn cover kept slipping. I don't even want to think what that would be like if lube got on there. I do like that the holder for the batteries is removable from the toy itself with out having batteries running lose in my toy box though.

And the thing that I probably hate the most, the Material. It's a material called "Crystalessence" its a lint magnet, it smells like plastic/rubber (even after a couple washes) and it has a rating of 2 on the Eden Safety Scale. According to the Guide of Materials its a PVC material that is non-porous, a lint magnet, safe with Oil, Water and Silicone lubes. Since its non-porous a good wash with hot water and toy cleanser will keep it pretty clean. I do suggest giving it a rinse before using it, just get any dust or lint off it.

All in all its a pretty decent toy. It is not water proof so take care when washing it and dont ya know take it in the shower with you.
Follow-up commentary   I've started to like it more 3 months after original review
The slight plasticy smell has left and it still performs well. I can say that I do love this toy more than I did when I first got my hands on it, all in all a great toy.
This product was provided free of charge to the reviewer. This review is in compliance with the FTC guidelines.