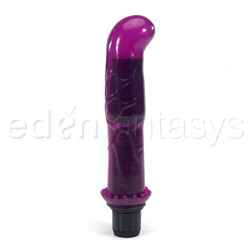 The whole experience was really good, even though it was a bit sticky because of the material. I loved the product very much, and I may purchase one of its identical products very soon.
Pros:
Effective,powerful,gives a good vibration
Cons:
A bit weak on clitoral stimulation.
Rating by reviewer:
4
useful review
When I first saw this on the site, I was a bit skeptical. I thought it was a bit sketchy ,because all the G-Spot vibes I have seen before were small and cute, used only one battery,and weren't that powerful; but when I got it in my hands, all my suspicions flew out the door and never returned. It felt like I was holding a pretty,purple colored pleasure-seeking missile. I took it out of the packaging, put in two Double-A Batteries,and went to my room to try it out.

Before I turned it on, my original thought was "Oh,it is a 2-Buzzer with a 3 Vroom". Boy, was I wrong. It is in reality,a 3 Buzzer with a 4 Vroom. Once I put it in my pussy, it was unreal. The feel of the jelly toy against my many different spots made my legs shake, nipples harden, and my asshole tighten. I tried it anally,and it just made me crazy! It felt very good, especially when I pushed it all the way in, and that's when the bumpy base of it hit all around my hole, making the vibrations more intense.

I used it on my clitoris too, and it just sent jolts of pleasure through my body. The same effect happened when I tried it on my nipples, but the best feeling was when I used it on my G-Spot and deep inside my pussy, which literally made me gush my cum all over my hand,the toy,and some of my ass. I have to admit,the toy is made of Jelly, which makes it hard to clean when dropped on the sheets or the floor, but the best way to clean it is a good Microfiber towel and a very good toy cleaner like Silly Suds.

I for one,enjoyed it very much. It's sleek, it knows where to hit your spots, it feels really good, and it can be hidden in a clothing drawer discreetly without being found or you could hide it in a closet based storage case.