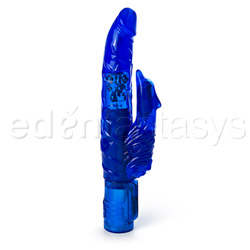 This is a rabbit-type vibrator that must have been designed with your typical female in mind. The size and vibrations are large enough and strong enough for even advanced users, but not too big or powerful for a beginner. The spinning dolphin hits your clit perfectly once the shaft is inserted fully to deliver mild to strong clit flicking stimulation that I'm sure all users will enjoy. We give this toy two thumbs up and D&B's Guarantee.
Pros:
Well-sized, Aesthetically pleasing dolphin, Great power levels.
Cons:
Small head, Rotating beads could be closer to head of shaft.
Rating by reviewer:
5
extremely useful review

The effectiveness of this toy in comparison to price is unequaled by any other toy in our rather extensive collection. Perfect for any women who enjoy mild to strong clitoral stimulation coupled with the feel of a fair sized, veiny dick rotating inside of you. It's best used in a bed, as you will find yourself writhing in pleasure. However, being waterproof means it can go with you to the spa or shower, if you like.

Made by Pipedream out of hard plastic, metal and PVC jelly, this toy is both soft and smooth, though without proper lubrication it will pull a bit like most toys. Even the veiny texture covering this toy is incredibly smooth, but firm enough to perhaps be felt by some women.

The dolphin on this toy adds great aesthetic value as it appears to be coming out of a textured "wave"; an area that most rabbit-type vibrators just leave smooth and simple. Although it's made mainly of jelly, it's still Phthalates free and doesn't have that bad chemical smell that will give you a headache. In fact, my girlfriend and I found it to have a very mild and almost pleasant aroma.

Overall this toy measures just a bit over 11" long with a 6" insertable shaft, and is 1.5" diameter at its largest point. The insertable portion of it looks rather realistic (save for color) and my girlfriend's biggest gripe with this toy is that the head of it is a bit small. Which, yes, helps with initial penetration but lowers the overall feeling of G-spot stimulation and rotation.

Its overall length and size would make this toy a poor choice for travel, but an excellent addition to any bedside drawer. In general the function and design of this toy seems well thought out, and it functions amazingly.

It's great for beginners considering the small head and shaft length, and more than adequate for advanced users. I believe though that any woman who is well versed in the use of larger vibrators might find the girth and power of this particular model to be somewhat drab and boring.

As was explained above, the main pleasure from this toy seems to stem from the spinning dolphin, though I am certainly not knocking the rest of its many functions. It has a vibrator located in the dolphin, along with the three tier spinning beads on a fixed track, and the rotating head. On the base of the toy you will find an incredibly easy to use control pad with just five basic buttons. The up and down buttons on the left control the shaft rotation speed, while those on the right control the dolphin's vibration and spin speed. One last button in the middle at the top causes the shaft rotation to stop and begin turning the other way, though the dolphin always seems to spin to the left.

Power for this toy comes from three AA batteries that fit easily into the control pad upon unscrewing the base. Both the dolphin and the shaft have three different levels of adjustment with a light up display on the control pad to let you know what speed you're on. Very useful. It's a bit loud, but not really more so than any other rabbit vibrator we've tried. Just don't expect it to be whisper quiet, especially on full throttle. Like most with rotating beads, if you clench on them the wrong way you will slow or stop the rotation and hear a grinding sound, so I suggest trying not to squeeze too hard, though it's not been much of a problem for us.

Since this vibrator is made mostly of jelly, it's a bit porous. That means sharing it is definitely not recommended unless you first cover it with a condom before each use, which some people prefer because it helps with the ease of cleaning overall. If you're like us though and it's a single-person toy, you just need to clean it before and after every use with a mild soap and warm water, or even better an anti-bacterial toy cleaner. Pipedream makes an excellent one that's not too expensive and really worth it for the care of your toy. After cleaning, let it air dry before storing it in a cool, dry place.

This jelly material is safe for use with both water based and silicone based lubricants, so I'm sure most of you have one on hand already you can use. If not I personally recommend Maximus or Liquid Silk as they are both, in my opinion, great lubes.

A last note about care is that even though this toy says it is "Waterproof" we have not tried submerging it since most waterproof toys are NOT submersible and we do not want to destroy ours by accident. To me, saying a toy is waterproof just means you can take it in the shower, and cleaning will be much much easier. No having to worry about getting water in the control pad while washing.

A hint from our experience is to spend the extra few bucks and buy good batteries. If you go with the cheap-O store brand you will find yourself getting frustrated at how often you have to change them out. Duracell's however work great.

Also, I love the button that allows one to rapidly stop and switch the spinning direction of the beads and shaft, especially when it's in the hands of your partner since you never know when it's going to happen.
This content is the opinion of the submitting contributor and is not endorsed by EdenFantasys.com