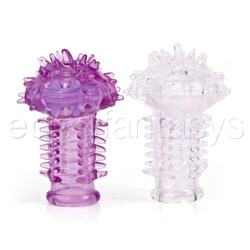 Other The finger vibe reviews

A waste of money.

Save your money with this one. I know it's not a lot of money, but you could find a better finger massager or a better product for this price. It's hard to clean, use and is cheap. It also lacks power. This product isn't even worth $2 for the frustration you'll have trying to make this work how you want.
Pros:
The nubs feel nice
Cons:
poor mechanical design, difficult to operate, cheaply made
Rating by reviewer:
1
extremely useful review

This is more or less a stimulator. I am not even sure it's intention is to being someone to orgasm, but if it IS intended for that purpose, it falls short of MY expectations. Sadly it fell short of my expectations in general. I didn't expect this to get me off. I wanted something to stimulate and add interest to foreplay. This was more frustrating than useful and more of a pain than powerful.

The idea is that you slip it over your finger for all over body usage. This sounds great, but if you have big hands, forget about it. He couldn't even use it! I wouldn't recommend this at all. It's not easy to use, it's not powerful enough to feel much of anything and it's not worth the $10 range that could be used on a better product. I only rated it 1 star, because it wouldn't let me give it 0.

This is made of TPR silicon which gives the impression that it's going to be as easy to clean as a pure silicon. To end the confusion, it's NOT. It got hairy and dusty and sticky and having the little nubs didn't make it any easier to keep clean. I didn't notice much of a smell, aside from a plastic scent that faded fairly quickly. The texture IS nice, although difficult to clean and is about the only thing you can feel from this product. It's covered in long-nub like things which are referred to in the description as "prongs" that go over the dome at the top and down the sheath for the finger. This is a great idea, but doesn't redeem the product. Anybody could use this material with the patience to clean it, but I wouldn't say it's ideal for anyone.

The design seemed like a smart idea initially. The problem arises when you want to swap out batteries. I'm not a fan of watch batteries as it is, and you have to remove the sleeve to change the batteries. The little vibrator inside reminded me of the TINY vibes you see on some cheap cockrings. I made a mistake, I suppose, by taking this out before playtime to examine the product and see how it worked. Once I put it back it, I couldn't really tell which way it was supposed to go. I ended up trying to position the button/switch on the side as the vibe fit best this way and made it easier to turn on and off, but I would end up turning off on accident during playtime. It just didn't seem to work out. When my man wanted to use it on me, the silicon didn't have enough give to fit over his finger. Even after awhile of me trying to use it and flipping it inside and out to mess with the batteries and vibe, it began to tear along the sheath. Sad. It's fairly small and could be easily stored of traveled with. This is probably one of the only good things this product has going for it.

This is activated by a switch which I THINK goes on the side. This was downright frustrating as it moved about in the sleeve and turned off at bad times. It slides back and forth into an on or off position and seemed really touch-sensitive. I was NOT pleased. Once on, the vibrations that were there were completely absorbed by the silicon and left much to be desired. I don't require a lot of stimulation, but this was nearly useless. Just when I would use enough pressure to feel anything, it would end up shutting off and making me reach for another toy to finish the job. It was very noisy at all, but with so little power, I wouldn't imagine it would be anyway. It's not waterproof either, so no shower fun. You would probably be better off using the shower head anyway.

This thing is a pain to clean. It attracts so much dust that I never felt like I could get it completely clean. When I would try to wash it, the dust would just stick around the little spines on the material and just make it sticky and nasty. I just cleaned it as well as I could with warm water and toy cleaner and stored it in a plastic zipper bag. Avoid using this product with any lubricants other than water-based.

This thing was just a waste of money all together. It's not suitable for anybody. It's a cheap toy, sure. But you could find something better for the price. They had the right idea, but just didn't execute it very well. It's more frustrating than pleasurable and didn't pull through for me a single solitary time. And now it's beginning to tear which tells me it's just a cheap crappy product all around. NO I don't believe I got a dud on this one. I think it's just a poor product. Not only is it a waste of money, but a waste of time.
Follow-up commentary   I still don't like it 25 months after original review
Nothing ever redeemed this product. It is awful when it comes to materials, quality, function, intensity and any other point that I haven't listed. I cannot think of a good thing about these aside from the price being awesome. You really get what you pay for, although I don't think you could give these to me, much less ask me to pay for more. Totaly rubbish.
This content is the opinion of the submitting contributor and is not endorsed by EdenFantasys.com