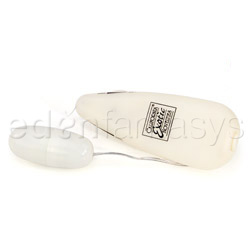 Sometimes high-intensity vibes come in small packages! This little bullet is cute and gets the job done. Some design changes would be nice, but aren't necessary.
Pros
Really inexpensive, intense vibrations, travel-sized, long battery life.
Cons
Some design flaws, not really insertable.
Rating by reviewer:
3
extremely useful review
When I picked this one out, the glow-in-the-dark aspect was the deciding factor, because I'm a sucker for cute things, outer-space type things, and stashable/travel-sized stuff. There were other colors, but this one seemed like the most fun. My old vibrator had died and I wanted something different. I was impressed at how much bang I was getting for my ten bucks, but there was room for improvement in its design.

It runs on AA batteries, and I was pleasantly surprised to find that it lasted a long time! I got quite a few sessions out of the toy before my batteries needed a recharge. It also has a wider range of intensity than other vibes I've used. It goes from a pretty gentle hum (which is barely audible) to a pretty intense-in-the-good-way buzz (which is still quiet, considering the vibrations coming out of it, but is a lot louder in comparison to its lowest setting).

This toy consists of a little handheld controller, a thin wire and a bullet. The bullet is hard molded plastic (it feels sort of like a plastic easter egg-- seam and all). Since it's made of hard plastic, it's easy to clean (just wipe it off though, it's not waterproof), phthalate-free, and the vibrations travel well through the material. The bullet is a sometimes difficult to steer, though-- especially when it's on full-blast and it's slippery!

I tried a variety of ways to get it to stay in place, including a rather silly attempt at jamming it into my panties and holding the bullet through them, but it still wiggled around. It felt great when it was hitting the right spot, but easily drifted away and needed some help getting back on track. I attribute this to a couple of reasons: it's somewhat small, the hard plastic slides easily on slick surfaces, and the vibrations (when turned up all the way) give it a mind of its own, or at least mild ADHD-- you sometimes have to remind it what it was doing.

I appreciated the ease with which I could change intensities, and the logic of the dial's design. The slipping I could handle, since I'm an experienced vibe wrangler, but the seam in the bullet would occasionally catch a sensitive spot and feel a little not-so-great. A condom slipped over the bullet was enough to take care of that problem, though. If you're extremely sensitive, I would suggest using a condom or sleeve to lessen that chance. There are no sharp edges or anything, and it might just be the way mine was manufactured, but the edges were a couple millimeters away from being flush. I tried inserting it vaginally and could barely feel it, so I wouldn't recommend it for that type of play. Since it doesn't have a flanged end, I would NOT recommend this toy for anal insertion, for safetly reasons.
Follow-up commentary   I still like it 3 months after original review
This little guy pales in comparison to other vibes I've obtained since we first met, but I think it's still a good little cheap vibe to get the job done. Also, none of the other vibrators I own glow in the dark, which makes them slightly less of a novelty.

Definitely worth the money, though, like most battery-powered vibes, it can be a bit annoying to have to keep replacing batteries. There need to be more rechargeable/plug-in vibes out there!
This content is the opinion of the submitting contributor and is not endorsed by EdenFantasys.com