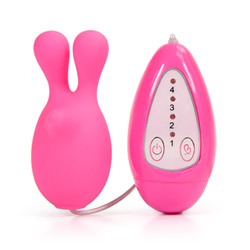 The Aphrodisia Bunny Tease is a bullet-style vibrator that is designed to look like a little bunny. The toy can be used on the clitoris or other sensitive areas of the body, like the nipples or inner thighs. The ears can be placed on either side of the clit when holding the bunny head “upside down” or both ears can be pressed onto the clit directly. The nose didn’t add much for me but it can also be placed directly on the clit. The ears can be used to penetrate the vagina but are approximately an inch long and don’t offer much stimulation that way.

This toy is made from 100% body safe silicone. It’s latex free and waterproof so it’s safe for anyone with latex allergies and perfect to bring into the bath or shower. The silicone is high quality and feels incredibly soft and velvety to the touch!

The vibrating portion of the toy looks like a bunny with extended ears/antenna and a raised nose. It connects to the remote with a wire and the remote is easy to hold and fit nicely in my hand. The remote is a tear drop shape, which makes using it easy. 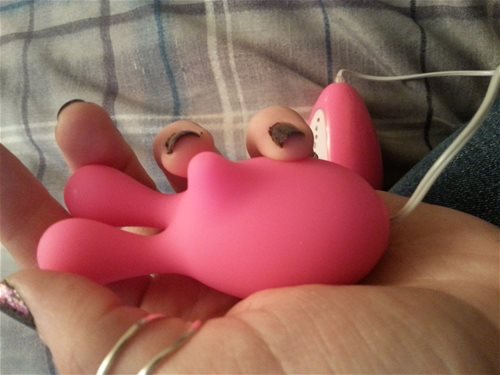 The toy has two buttons: a power on/increase intensity button and a power off/decrease intensity button. The buttons are easy to push and there are lights on the remote that correspond to the selected vibration level. If the toy is set higher than the first level the only way to turn it off is to continuously hit the power off/decrease button, which will lower the level until the toy is off. The toy will not turn off if you hold down the power button. This was my least favorite feature of this toy because I want to be able to hit the power button from the highest setting and turn it off without having to go back down all the levels. When the toy is turned back on it will be at the first level again.

The vibration is mainly felt in the ears and the nose and minimally felt throughout the rest of the egg. The highest level of vibration doesn’t get too intense, which could be either a good thing or a bad thing depending on your preference. I didn’t notice a huge difference between vibration levels, though the highest setting is definitely my favorite! 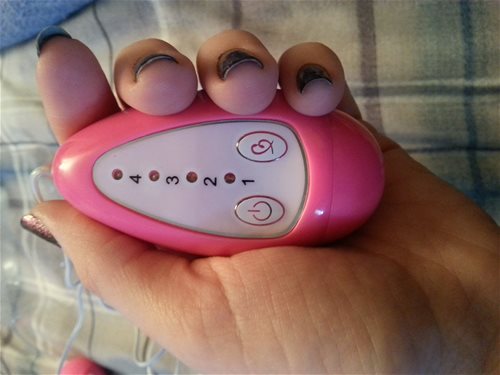 The bunny can be used with water based lubricants. The instructions say it can be sterilized by wiping the toy with 5% bleach solution. Although the packaging does not say, you can also easily wash the toy with soap and water. Do not boil! The toy requires two AAA batteries to operate.

The toy comes in an easy to open box and placed in a plastic holder carton that separated the egg from the remote while keeping the connecting cord untangled. There are easy to read instructions on the outside of the packaging but they provide minimal information. There were no additional instructions or manufacturing details in the box and there was no diagram for how to use the toy, which I would have liked because I was unsure about how/where to hold it. 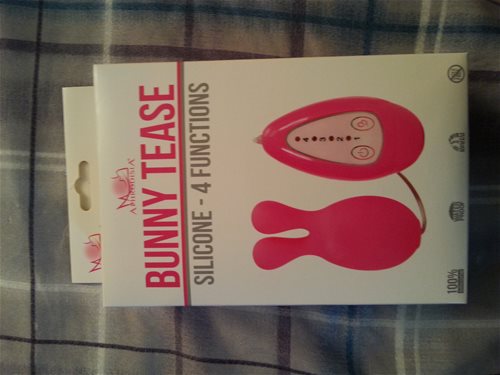 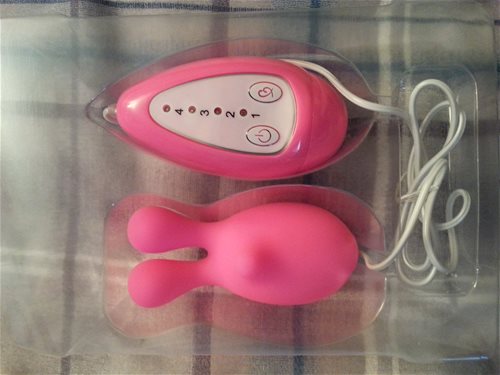 Overall the toy worked like a regular bullet vibrator and it got the job done! I don’t know that the ear antenna or the raised nose added anything extra for me personally but they felt nice. I like the simple design, though I wish there was a different power off option. I think this could be a great toy for beginners because there aren’t an overwhelming amount of options and settings and the intensity isn’t too high (this may vary from person to person). This could also be a good warm-up option for those with a little more experience or higher tolerance.
This product was provided free of charge to the reviewer. This review is in compliance with the FTC guidelines.