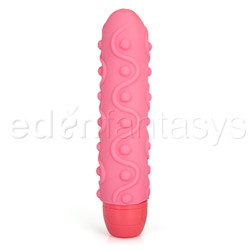 This toy is amazing for beginners who want to explore more in the toy world. The texture is very life-like and smooth with three basic speeds.
Pros:
Amazing Texture
Cute Look and Color
Great for Beginners
Cons:
Strong Odor
Rating by reviewer:
3
extremely useful review

This was a different type of toy for me. It says it is made out of "Pure Skin," which is not like any of my other toys. This toy is so soft and smooth, I’ve heard the texture been referred to as butter, and that’s exactly how to explain it. I was blown away by the texture as well as the pattern. The toy has four rows that consist of 7 dots that have squigglies running between the dots. The dots or squigglies do not stick up a whole lot therefore you can feel them but it’s not extreme. The texture is probably more for beginners because it feels like real skin and is more life-like then some. It would probably be a good transitioning vibrator for the harder textured material toys. The one HUGE turn off for me was the smell of this toy, on the box it says "lightly scented", and that is not true in my case. The scent was (and still is after many uses) very pungent. It is somewhat of a sweet smell mixed with typical "new toy" smell (not pleasing to me). Once I opened the toy from the shipping box I really couldn’t smell it, upon taking the toy out and messing with it the odor automatically filled the room, then after putting it back in its box and placing it in a drawer for a few hours the whole drawer had an over powering odor to it when opening it up. I have washed and used the toy many times and the scent has calmed down some, however it is still there. If you do not like toys that are scented then this is probably not a best choice for you.

The function of this toy again is a very simple one. The three traditional speeds of low, medium, and high all work very well for their intended and expected use. When the vibrator is on, the vibrations are coming from the tip of the toy and reduce down towards the battery capsule. Personally, since I am more of an advanced toy user, the best speed was highest, only because I require more speed to reach orgasm. This toy is similar to one of my firsts, and it was a good one to experiment with the lower speeds when starting out. Low and medium are very good for nipple and clitoral stimulation. The control is at the bottom of the toy, a simple easy to push button. It doesn’t take much force to push, so even if lube gets on it, you still are able to push and change the speed. The lowest speed is very hard to hear, even when holding the toy; it is a light buzzing noise. Medium is a little louder and cannot be heard over a blanket but the highest speed is pretty loud humming, but probably not able to hear through a blanket and definitely not through a door. It’s loud for a smaller three speed vibrator, but not as loud as some I have heard. Again, this toy is said to be waterproof and I have tried it in the shower and it held up fine. The O-ring inside is pretty big and the cap closes tightly so most likely it will hold up in water. I have had the toy for about a week now and have used it probably 5 or 6 times for about an hour to two hours each time on the highest speed and have still not had to replace the batteries which are two AAs.

Since this toy is made of TPR, it can be used with silicone and water-based lubes. I use a water-based lube myself and it has worked great. However you choose to store this toy will most likely cause it to have lint unless you store it back in the box it came in, I recommend cleaning it before use and using a condom if necessary. Since this toy is so horrible about picking up lint and fuzzies, I have used a condom after the first use just to be on the safe side. Overall it’s pretty simple to care for this toy. I have washed it with soap and water, and I’m sure toy cleaners and wipes would work fine too.

The packaging is clear, see-through plastic with the toy's name and little logos on the front and right side. It has a plastic insertable tray inside that the toy fits into. On the back, it tells a little about the toy; 3-speed, EZPush button, Lightly Scented, Dual Density, Truly Life-Like Feel, Maintenance Free. It has some instructions at the bottom stating: Twist cap securely before use, Material: TPR. Wash before and after each use. Remove batteries when not in use. Always use a water based lubricant with this product for maximum pleasure. Then on the left side of the box it just show a picture of the toy and states that it is a vibrator. It's pretty simple packaging.

Overall, this toy was a very pleasurable toy. I personally prefer more advanced than this toy, but it was able to get the job done. I would recommend this to anyone who is starting out and experimenting.
Follow-up commentary   I don't like it anymore 23 days after original review
This toy was awesome when I first received it. It was a traditional vibrator but it got the job done. Since my review, a few things have started to happen with this toy which has moved it to my "Don't like it anymore" pile. First the TPR it’s made of is a great material, however it looks like they made it from two different pieces and then fused them together. At the base of my toy it’s like the first layer is starting to come apart from the second layer. It is still usable but while in use my fingers catch on that and it is distracting, and in the moment I personally don’t want to mess with a faulty toy. Another issue I’ve started having with it is the TPR piece is coming off of the plastic vibrator piece. I’ve taken it off to clean it, put some corn starch in the bottom to make it hold but it’s almost like the more I use it and clean it the more the TPR stretches and loosens up. So now during use the TPR piece slides off and I spend my time trying to get it back on. This is a good first toy, especially if you are not going to use it very much. I have been very disappointed that this toy has started to tear apart after only about a month.
This product was provided free of charge to the reviewer. This review is in compliance with the FTC guidelines.